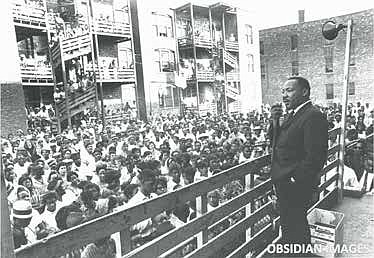 Dr. Martin Luther King Jr. addresses residents in an alley behind an apartment building on Chicago’s West Side. King came to Chicago in 1966 to challenge slum conditions and racist policies. This historic moment was captured by legendary photographer John Tweedle, the first African American photographer to be hired by a major metropolitan daily newspaper. This and other rare photos of King taken by Tweedle are being offered as NFTs by the Obsidian Collection to be sold in the NFT marketplace. Obsidian Images.