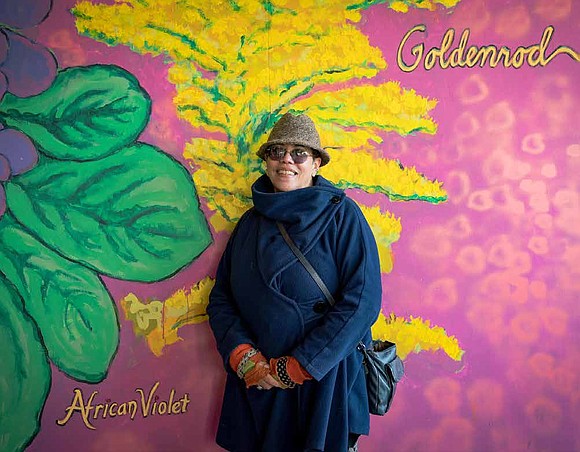 Artist Arlene Turner-Crawford stands in front of the mural she helped to create on the North and South walls of the 64th and Dorchester Streets viaduct during the Nov. 9 dedication ceremony. The mural was a collaborative effort between the artists, commissioners and the Woodlawn community. Photo Credit:Kaye Cooksey

The University of Chicago office of Civic Engagement along with the William Hill Center for the Arts and the South East Chicago Commission held a ceremony on Nov. 9 to dedicate a new mural located on the north and south walls of the 64th and Dorchester viaduct in Woodlawn.

The mural Seeds of Our Culture is a collaborative effort between the community, the artists and the organizations that commissioned the art work.

“The goal of this whole project was to be community oriented with community input,” said Nika Levando Associate Director of the Office of Civic Engagement at the University of Chicago.

Phase one of creating the mural began in January when a call to artists was released. The requirements to be considered were simple, the artists must be from the South Side or have their gallery on the South Side. Over forty proposals were submitted.

“We gathered a pretty large advisory group to oversee the proposals and to go through a jury process and make a decision on which two artists would be selected to do the work,” said Levando.

“I felt really fortunate to have been selected for this project,”

Arlene Turner-Crawford said. “I’ve done other murals with community participation and I enjoy the opportunity to collaborate with both artists and residents.” Phase two of the project was designing the mural with the community in mind.

“We went to a number of community meetings and forums so that our two artists could hear the climate and input from Woodlawn about what’s important to the neighborhood and what’s on peoples minds,” said Levando.

There was also a survey on the Woodlawn website regarding

the mural to receive feedback from people who weren’t attending the meetings, according to Levando.

“There were some changes made to the original concept from a few of those conversations and forums for input,” said Levando

“I love that my work and Statik and the community’s work created harmony on many levels,” said Turner-Crawford.

At the dedication ceremony attendees were given an infographic brochure that broke down the significance of every portrait and plant in the mural. They were also given a packet of Blue Iris seeds to take home and plant.

“We wanted folks to come away with something and then continue to plant the seeds in their own garden,” Levando said. “So really continue this dialogue about diversity and culture and how do you continue to engage folks around this mural past just walking or driving by it.”

The University of Chicago office of Civic Engagement has a history of supporting and showcasing public art on Chicago’s south side, specifically through murals. They have supported mural projects in the past and will continue to do so in the future.