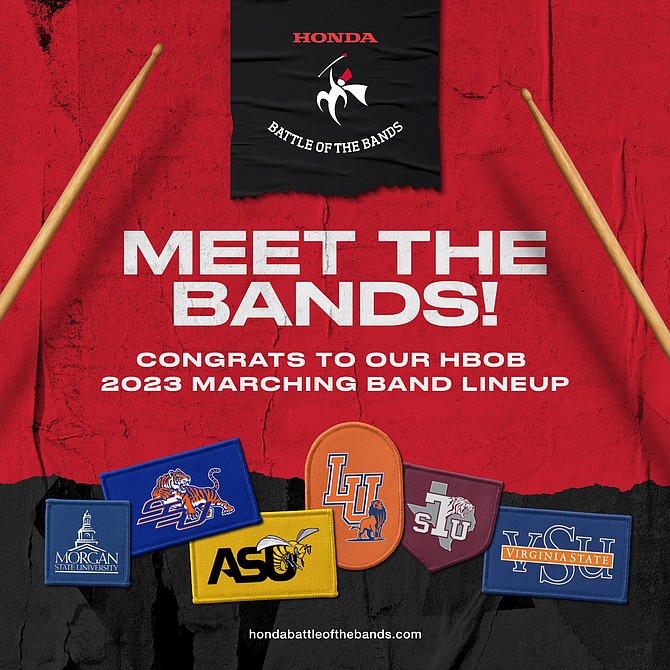 Six HBCU marching bands will bring the music and excitement to Montgomery, Ala. when Honda Battle of the Bands returns live on Feb. 18. PRNewsfoto/Honda.

Honda Battle of the Bands (HBOB) returns LIVE on February 18, 2023; tickets now on sale at www.hondabattleofthebands.com

TORRANCE, PRNewswire -- The votes are in and six marching bands have been selected to perform at the 2023 Honda Battle of the Bands (HBOB), the nation's premier showcase for Historically Black Colleges and Universities (HBCU) marching bands and dance teams. HBOB marks its 18th year as one of the largest celebrations of Black culture and musical excellence, returning to a live event format and also livestreamed on February 18.

The 2023 HBOB Invitational Showcase will take place at Alabama State University in Montgomery, Ala., bringing the music and excitement to an HBCU campus for the first time with high-energy performances from the following six bands:

Each HBCU school represented by the six bands will receive an institutional grant from Honda to support their music education programs, as well as an all-expenses-paid trip to the Invitational Showcase.

Honda invited all HBCU marching bands to participate in the 2022-2023 HBOB program. After fans nationwide cast more than 100,000 online votes, the final six bands were selected through a voting process that included HBOB fans, HBCU band directors and students, and Honda representatives. The four bands with the most votes automatically secured their spots in the lineup, while the other two bands were selected by the HBOB committee.

"Congratulations to all of the finalists! Honda is excited to carry on the HBOB tradition of bringing together students, alumni and fans to recognize the talents of these spectacular marching bands and dance teams," said Yvette Hunsicker, vice president of Corporate Social Responsibility and Inclusion & Diversity at American Honda Motor Co., Inc. "For over 30 years Honda has supported HBCUs in their unique and critical role of providing higher education and opportunities for advancement to the Black community, so hosting HBOB on an HBCU campus for the first time feels like coming home.

"We are very excited to host the 2023 Honda Battle of the Bands Showcase and provide a buzzing atmosphere of HBCU pride and culture on Alabama State University's campus," said ASU President Dr. Quinton T. Ross, Jr.

"It is an honor to host the iconic Honda Battle of the Bands event, which has a long history of inspiring and energizing fans of music and Black culture across the country," said Smiley. "HBOB is a one-of-a-kind experience for these talented student musicians and will be an unforgettable day for everyone."

Tickets for the HBOB Invitational Showcase are on sale at www.hondabattleofthebands.com.

Fans can join the conversation using #HBOB and follow along as the final six bands' journey commences to the Invitational Showcase on official HBOB social media channels:

For over 30 years, Honda has supported the success and dreams of Historically Black College and University (HBCU) students through initiatives including the Honda Campus All-Star Challenge and Honda Battle of the Bands. These programs provide unforgettable experiences and opportunities for HBCU students, including meeting and networking with peers from other HBCU schools. Honda has impacted the lives of more than 200,000 students and awarded over $14 million in grants in support of HBCU education programs and facilities improvements.

To advance its leading investment in HBCUs, Honda is a member of the HBCU Partnership Challenge, a Congressional Bipartisan HBCU Caucus initiative that brings together government, industry and HBCUs to create strategic, more sustainable HBCU partnerships. Honda also has partnered with the Thurgood Marshall College Fund to provide annual scholarship funding to support HBCU students pursuing an education in engineering, supply chain management and manufacturing-related fields.