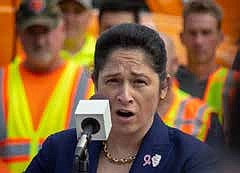 Illinois Comptroller Susana Mendoza is pictured at an event in 2019. She is the subject of a lawsuit by former state lawmakers who are seeking backpay for automatic raises that were withheld when they were in office. Capitol News Illinois file photo