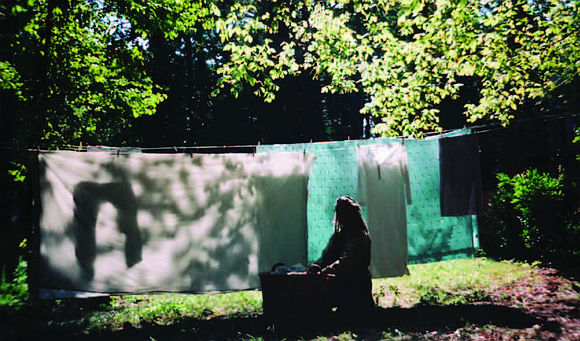 Much of when a parent and child are in conflict, goes unresolved in Black families. It oft en takes generations or extreme circumstances to initiate the healing process, especially in a mother-daughter relationship.

That supernatural healing was depicted in the recent film short entitled Laundry Day both written and directed by Olamma Oparah and Cinematographer Colbie Fray. Dedicated to Toni Morrison, Laundry Day

was conceptualized around Poet, Victoria P.

The film focuses on millennial dissonance between mother and daughter and how technology aides in the erasure of Black culture, traditions and generational discord. It also questions the ability to recognize or not, the “charge to keep” generations passed as a silencing force within Black and female relationships.

Look out for the Laundry Day film premiere on the festival circuit.

Olamma Oparah is an Atlanta based director and independent radical. Her choice of cinema lies in its ability to convey the inner reachings of the soul. Her use of sound and visual associations represent the universal knowledge expressed through the African diasporal experience,deconstructing mainstream media’s representation of Black women, men and children. Themes in her work oft en pose the questions, “How does one heal from genetically ingrained PTSD?” or, “How do women exact internal change if rage is impolite, unaccepted, or ignored?”

Colbie Fray is a director and cinematographer based in Atlanta, GA. Her love for camera work stems from being chosen at nine years old as a videographer for her school news station. She is self-taught and continues to learn new ways of storytelling through lighting and composition. Th rough her work, she hopes that Black women in particular are able to see themselves outside of western society’s “white male gaze” and open dialogue towards conversations that allow autonomous defi nition.