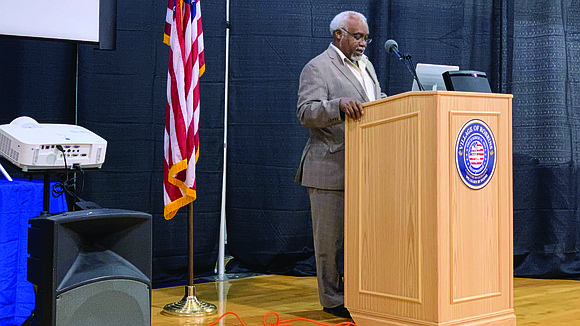 “We’re glad that you’re here to hear the information that is most pertinent for you and for us as a unit,” he said. “The goal is to be as transparent as possible when assuring the commitment toward dealing with the latest challenge that we have. My team is in position to be proactive, hence the meeting tonight. And, tweaking our own plan on a regular basis. Further, we are concerned about the entire region and willing to work cooperatively with all.”

Ward said working cooperatively is what is necessary to ride the wave. He has participated in conference calls with Chicago Mayor Lori Lightfoot, as well as Illinois Governor J.B. Pritzker.

“I am deeply appreciative of the opportunity to come and speak. It is always a pleasure to come to a place where you have regular common folk who want to learn some things. I applaud you and your team for organizing this so that we can share just a little bit,” Mason said.

“This particular virus that jumped from being a virus that was with an animal to a person, happened because of some human intervention,” he said.

“Most of the viruses we have come from animals. The way it happened in China, this virus was helped to be transmitted by bats. Bats who bite animals and they bite other animals. Just like when we get bitten by mosquitoes,” Mason said. “This particular virus that jumped from being a virus that was with an animal to a person, happened because of some human intervention.”

Mason cautioned people to beware of coughs and sneezes

He said when people walk past an area where an infected person freshly coughed or sneezed, or touched the surface, if they put it on your face and rubbed their nose, those particles can get into a person’s system.