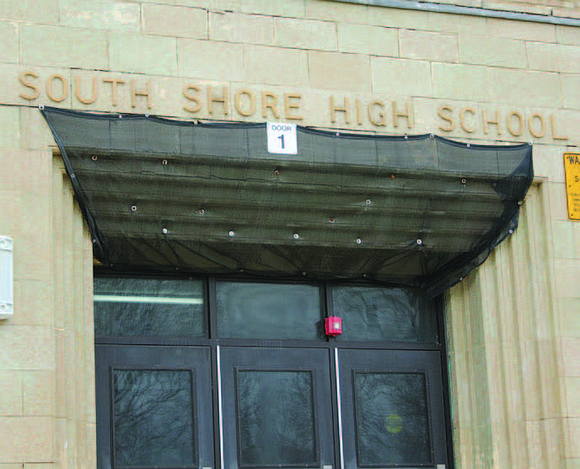 A 2-year lease proposal that must first be approved by the city council would allow the Chicago Police Department to use the former South Shore High School building as a satellite facility for classroom training for officers. Photo credit: Wendell Hutson

This year, if all goes as planned, a shuttered high school in South Shore would be used for the next two years by the Chicago Police Department to provide sensitivity and conflict resolution training when dealing with the public.

Earlier this month, the Chicago City Council’s Housing and Real Estate Committee approved a proposed lease agreement between the city’s Fleet and Facility Management Department and the Chicago Board of Education for the Chicago Police Department (CPD) to utilize the former South Shore High School building, 7627 S. Constance Ave., which has been vacated for the last six years. Currently, classroom training for officers is held at the police training academy, 1300 W. Jackson Blvd., where police officials said more classroom space is needed.

The full city council, which was scheduled to vote on the proposal at its March 18 meeting until it was canceled due to the coronavirus outbreak, must now approve the plan before it can move forward.

Anthony Guglielmi, a spokesman for the Chicago Police Department, did not return calls seeking comment.

The lease proposal has the support of Mayor Lori Lightfoot and Ald. Michelle Harris (8th), whose ward includes the 150,000 square-foot building.

“I support this proposal because it is necessary for the police department to fulfill its mandate under a [federal] consent decree and unfortunately, this cannot be fulfilled at its current facility,” said Lightfoot.

A federal judge approved a consent decree last January that requires the CPD to undergo reforms after former Attorney General Lisa Madigan sued the CPD after what she said was a history of civil rights violations.

As a result, all 13,000 officers must now receive new training; publish use-of-force data monthly; revise their policy on using tasers; officers must now document each time they draw their weapon; change rules on how officers are investigated for wrongdoing; and it requires the city to boost wellness and counseling programs for officers.

“Right now officers are taking classes literally in the hallway at their training facility,” said Rider. “The alderman hosted two community meetings to discuss this proposal with residents and it was well received by the community.”

He added that South Shore High School students will be able to use the building’s theater, and space would be leased to a community-based coffee and donut shop too.

It’s unclear what the building would be used for once the CPD vacates the building, which has been vacated since 2014 when South Shore International College Prep moved into a new building at 1955 E. 75th St.

A $95 million police and fire-training academy will be built at 4301 W. Chicago Ave. in West Garfield Park, and all training would move there upon completion, which is expected by 2021.

While residents are concerned with how the proposal affects parking, Rider said the alderman is already working on a solution to parking related issues.

“The school has a parking lot, but it is not big enough to support the number of vehicles that would be at the school daily,” explained Rider.

“That’s why we are looking at two nearby parking lots to see if we could lease space there to ensure residents do not have to look for parking.”