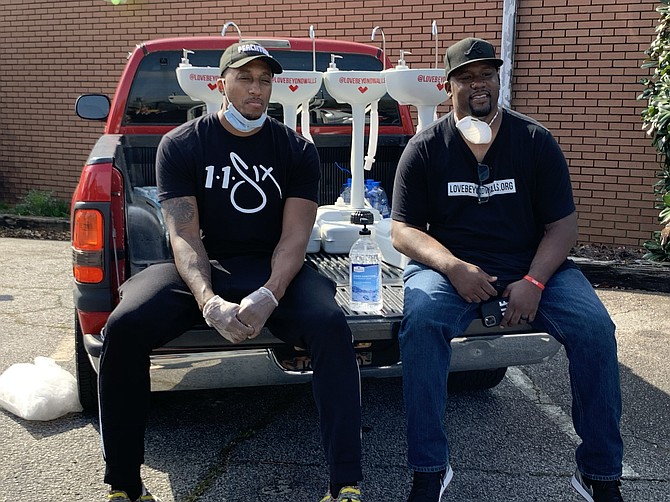 Multi Grammy Award-winning platinum selling artist, Lecrae has partnered with Love Beyond Walls to plant portable hand washing stations around the Atlanta Metro Area for homeless and displaced people to clean their hands in response to Coronavirus (Covid19). The initiative kicked off on Thursday March 19th at Love Beyond Wall’s Center located at 3270 East Main Street, College Park, GA 30337. Lecrae joined the Love Beyond Walls team to begin assembling the sinks after which they where filled with water, loaded on trucks, and distributed to key locations frequented by the homeless in the Atlanta Metro Area.

The initiative was developed by Terence Lester, executive director of Love Beyond Walls, an organization whose mission is to “restore dignity to the homeless and poor by providing a voice, visibility, shelter, community, and grooming and support services to achieve self-sufficiency.” Lester who was once counted amongst Atlanta’s homeless is now founder of Love Beyond Walls and is pursuing his PH.D. in Public Policy & Social Change. “We’re excited to have Lecrae be involved with our work at Love Beyond Walls because he understands the importance of restoring the community and affirming the dignity of those who are unseen. Lecrae understands that it takes both faith and action to provide real restoration in our communities and world. Jesus washed feet, now we have an opportunity to wash hands and provide that same type of restoration in a modern way.”

“I’ve been following Covid19 quite intently since it’s become a pandemic and first and foremost, I want to remind people THIS IS NOT THE END!” shares Lecrae. “While we can heed The Center For Disease Control and Prevention’s recommendation to stay away from others who are sick, avoid crowds, and properly wash our hands, I can’t help but think about those living on the street who have no way to bathe or wash their hands. People who may eat, sleep, and congregate so close to each other that social distancing is not possible. Partnering with Love Beyond Walls is my way of doing what Jesus did which is serve humanity. I’m humbled to support the work of organizations like Love Beyond Walls who help, serve, bring light, love, peace, and restoration every day.”

Lecrae is a multi-Grammy Award-winning platinum selling artist, New York Times best-selling author, entrepreneur, speaker, thought leader, philanthropist and Co-Owner/President of Reach Records. His 2014 album, Anomaly, to date, he has sold more than 3 million copies and been nominated for 5 Grammy Awards including a win for Best Gospel Album, 15 Dove Awards, one Billboard Music Award, and received both a Soul Train Music Award and BET Hip-Hop Nomination. He will release a new single, “Set Me Free” on Friday, March 20th and his 9th album, Restoration, mid-May.

Lecrae is partnered on several major real estate projects to restore Atlanta’s English Avenue aka The Bluffs, an area known for its rampant drug trafficking and violent crime statistics. Only a block away from the new Mercedes Benz Stadium, two-thirds of its residents live below the federal poverty line and 44% of the homes are vacant. As part Lecrae and Peace Prep’s Restoration campaign he has partnered with Invest Atlanta to revitalize English Avenue!

He is an active member of the Board of Advisory for Peace Preparatory Academy, the first school in the English Avenue area to be opened in more than 20 years. The last one, English Avenue Elementary, closed in 1996. Here’s a brief YouTube video on Peace Academy and a feature that ran in AJC and Christian Headline.

About Love Beyond Walls & Terence Lester

Love Beyond Walls is an organization that focused on telling the stories of and working with those wrestling with poverty and homelessness. The organization was founded in December 2013 by Terence Lester, speaker, activist, author, and thought leader in the realm of systemic poverty. The organization's goal is to bring greater awareness and response to issues surrounding homelessness, poverty, and economic inequality. Lester is the author of four books, his latest, “I See You: How Love Opens Our Eyes To Invisible People” released August 13, 2019 with InterVarsity Press. He also holds four degrees and is working towards his doctorate.

Lester’s awareness campaigns have been featured on national outlets like CNN, MLK50, TVONE, Coca-Cola, Creative Mornings, USA Today, NBC, AJC, Black Enterprise, Rolling Out, Upworthy, and have been viewed by millions of people worldwide. In 2018, Terence led the March Against Poverty as he walked from Atlanta to Memphis (386 miles). He finished the march and spoke at the historic Lorraine Motel for the 50th Anniversary of MLK’s assassination.

Love Beyond Walls recently partnered with the National Center for Civil & Human Rights to launch an exhibition called Dignity Museum to address the stigmas and social biases around poverty in America. The interactive exhibit creates an up-close and immersive experience to understand the plight of those forgotten in the life of homelessness and poverty. During February 2020, Love Beyond Walls & Terence Lester was featured in the ‘History Shakers’ Coca-Cola Commercial for Black History Month.

For more information on Love Beyond Walls, visit Lovebeyondwalls.org