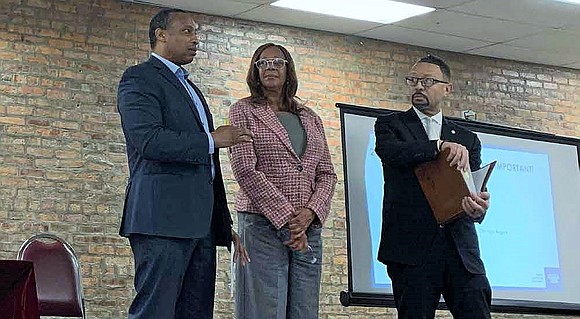 Jeanine Beasley, media coordinator for the U.S. Census, presented information on how residents can be counted in the 2020 Census. Photo credit: Tia Carol Jones

The goal of the meeting was to present information to residents about how to participate in the census and why it is important.

“I’m still learning about how this process is going to go, this is my first as an elected official,” said Mitchell. “We have to be counted. I lost 10,000 residents.”

Hairston said it will be her third census. She said the census is really important for the community.

“It is really, really serious and important because what we have the potential to lose in the next remap, if we are not all counted, is potentially three black wards in the city of Chicago. Three black wards, that means our voting strength will be diluted and I cannot stress that enough,” she said. “We talk about the things that we need in our community. We are able to get those things when we are counted.”

Hairston said there are more than 7,000 seniors in her ward and she is not sure all of them have access to computers. So, she has been trying to come up with creative ways to make sure her constituents are counted. One idea was to go into the multi-units and have residents come into the lobby and fill out the data. The pandemic also could complicate measures to count residents.

“And, I know there’s been a lot of talk about the Coronavirus that’s going on and people don’t want to let people come into their house or anything and I think we, meaning the county and the city, all of us are going to be trying to find creative ways to make sure we get counted,” she said. “So, we’re going to be creative, we’re going to [be] relying on you to get the information out.”

Lowry agreed with Hairston about the potential loss for the community if residents are not counted.

“What we’re already hearing is we will lose one seat, may lose two seats -- congressional seats. That will impact our federal funding,” he said. “As we look around, especially where a lot of us spend our time, we still don’t have enough resources. So, we can’t afford to lose the federal funding because we haven’t counted folks who should be counted.”

According to Lowry, the county has devoted $4 million over the last year and this year relative to the hard to count population and the goal is to get those individuals counted.

Lowry added it’s important the community get the word out and tell other residents they need to be counted. It’s also important to share the knowledge, he continued, about what can be gained and what will be lost. Being counted is vital to funding, having a voice in Washington and “relative to our electoral college influence,” Lowry stated.