Ice Cube to Black Press of America: ‘You’re All We’ve Got’ 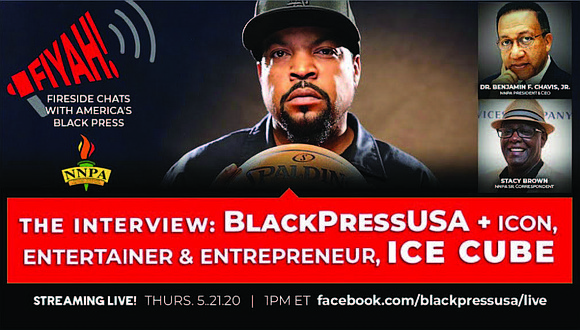 The only actor to have at least five highly-successful movie franchises (Friday, Barbershop, Are We There Yet?, Ride Along, and 21 Jump Street), Ice Cube said he’s merely taking advantage of the opportunities he’s been blessed with.

Ice Cube to Black Press of America: ‘You’re All We’ve Got’

Thirty years ago, Ice Cube debuted his seminal “AmeriKKKa’s Most Wanted” album, which many at the time said was the apex of hip hop’s existence.

Today, Cube is not only one of the world’s biggest music stars, but he’s also at the top of Hollywood’s A-list.

In an exclusive livestream interview with the Black Press of America, the legend said he takes nothing for granted.

“I’m not going to take a day off,” stated Cube, whose real name is O’Shea Jackson. “It’s good that people enjoy the work that I do, and I’m going to keep it coming,” he stated.

Following a long list of blockbusters like Boyz ‘N the Hood, Three Kings, and The Players Club, Cube’s new film, The High Note, debuted on Friday, May 29 on various streaming services.

The only actor to have at least five highly-successful movie franchises (Friday, Barbershop, Are We There Yet?, Ride Along, and 21 Jump Street), Cube said he’s merely taking advantage of the opportunities he’s been blessed with.

Born in predominantly Black South-Central, Los Angeles, Cube said the Black Press remains as vital today as when he was a baby in 1969.

“You [The Black Press] is all we’ve got, to be honest,” Cube stated.

“You’re our last line of defense when it comes to the truth, and when it comes to things that are of interest for our people and that’s something we must keep intact, nurture, fund, and do everything we can to keep the Black Press going.”

“You’ve been a lifeline to the community, letting the world know what’s going on. We’re underreported and underappreciated. [Public Enemy leader] Chuck D told us a long time ago to ‘Don’t believe the hype.’ You’ve got to listen to the people that love you. So, thank God for the Black Press.”

“Do your thing,” Cube said when asked what his message was for young people.

“Stay determined and creative. Technology today is perfect for artists to be themselves and do what they feel and not conform to anyone,” he stated, noting that hip hop artist Soulja Boy turned himself into a superstar by creating music from his home.

“You have to fall in love with the act of creating something new,” Cube continued.

“If you do something you really love and are satisfied with finishing a great project, you never know what you’ll get out of it.”

“It’s a great movie about the music industry. I play the manager of superstar Grace Davis. This story is of this assistant of this superstar and her journey,” Cube stated.

“Tracee Ellis Ross had a front-row seat to one of the biggest superstars in the world (her mother, Diana Ross), was going to work all the way around.”

Dr. Benjamin F. Chavis, Jr, NNPA President and CEO, saluted Ice Cube for his outstanding achievements and ongoing commitment to the empowerment of Black America. Chavis stated, “Ice Cube continues to represent the best of the genius of hip hop that transforms the world into a better place for who cry out for freedom and justice.”