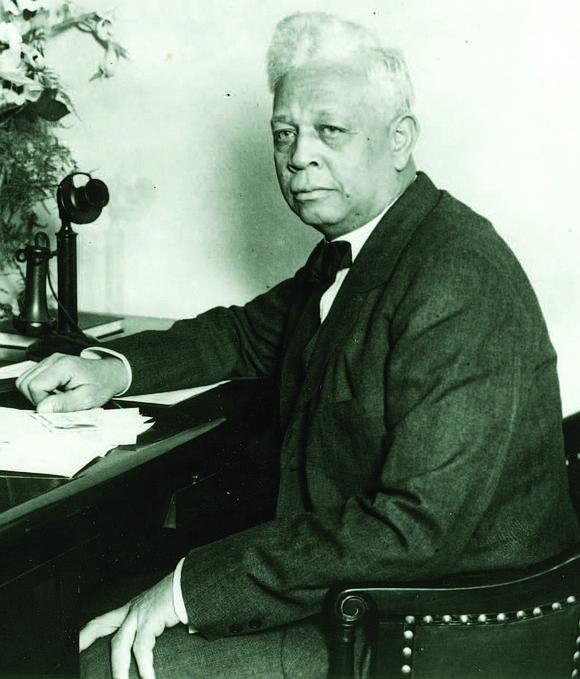 U.S. Rep. Danny Davis (D-Illinois) is expected to attend and speak of the important role De Priest played in the civil rights movement nationally, in Chicago and the South Side.

Landmarks Illinois will also share news of the much needed restoration project at the former De Priest home, which was completed this fall.

The restoration project at the De Priest building began in 2017 when Landmarks Illinois was awarded a $250,000 grant from the National Park Service’s African American Civil Rights Grant Program to carry out essential roof and masonry repairs.

Landmarks Illinois contracted with local architecture firm Bauer Latoza Studios to serve as project manager to develop a restoration plan including roof replacement and needed masonry repairs. Through the work of Bruno’s Tuckpointing and Ridgeworth Roofing, the De Priest Apartment Building, constructed in 1920, is now water tight. The roof replacement included restoration of an original skylight over the stairwell.

“Landmarks Illinois thanks Kimberly Echols, owner of the De Priest Apartment Building, for rallying support around its restoration, as well as the National Park Service for making necessary funding available,” said Bonnie McDonald, Landmarks Illinois president & CEO. “This building is an enduring tribute to De Priest’s struggle for civil rights, and here, his story can continue to inspire generations of activists to stand for human rights.”

De Priest lived in the apartment building between 1929 and 1951, and it was designated a National Historic Landmark for its association with De Priest in 1975.

Beginning in 1904, De Priest held a seat on the Cook County Board of Commissioners, and in 1915, he became Chicago’s first black alderman, serving his first term on City Council until 1917.

Later, De Priest served Illinois’ 1st congressional district where he was the sole Black representative during his time in Congress. He is long remembered as an advocate for antidiscrimination and desegregation.

For instance, in Congress, De Priest introduced several anti-discrimination bills, including his 1933 amendment barring discrimination in the Civilian Conservation Corps, which was signed into law by President Franklin D. Roosevelt.

“De Priest made significant contributions to the foundations of the civil rights movement that Dr. King, Rosa Parks, Jessie Jackson, Mamie Till and locally, Timuel Black, Jr., would call upon to continue fighting for justice and equity,” said McDonald. “Landmarks Illinois is proud to play a role in promoting the legacy of Oscar Stanton De Priest.”

Kimberly Echols is the current owner of the De Priest Apartment Building, inheriting the building from her late mother who purchased it from the De Priest family in 1990. Echols will also speak at the upcoming community event, detailing why the building is important to her personally as well as the entire Bronzeville neighborhood.

The January 20, 2020, community event will begin with comments outside the De Priest Apartment building, 4536-4538 S. Dr. Martin Luther King, Jr., Drive, at 10 a.m. before heading to the nearby Mt. Pisgah Missionary Baptist Church at 4600 S. King Drive for additional comments and refreshments. Members of the public are welcome to attend.