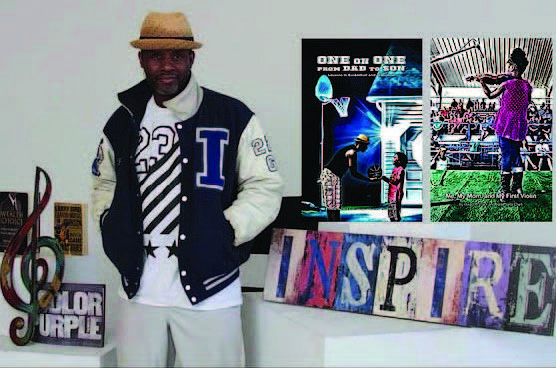 Actor Dwayne Clark, his 8-year old son DJ, and his 11-year old daughter Jada have launched a series of children’s books that portray life lessons from their family experiences to motivate young readers.

Written from a child’s point of view, the first two books – “One on One from Dad to Son: Lessons in Basketball and Discipline” and “Me, My Mom, and My First Violin”— are available on Amazon.

Dwayne’s love of performing as a Broadway actor and his role as a youth motivational speaker led to his writing books that portray African American families in a positive way. “It is not only beneficial for children of color, but for all kids,” Dwayne says.

Dwayne’s love of performing and his role as a youth motivational speaker inspired the books. He realized that his children’s experiences supported messages he was using at schools and workshops. By telling stories from a child’s point of view, he hopes the books will educate children about the effort required to foster a unique talent. The books also reinforce the importance of parents sharing their own experiences with their children.

“One on One” is the story of a father sharing his love of basketball with his son DJ. DJ learns about the history and fundamentals of basketball while gaining the self-discipline that can help him succeed in all areas of his life.

“As a kid I played basketball. I worked hard at it. With repetition and coaching you get better. When I became a Broadway actor, the discipline I learned from basketball helped me tackle eight shows a week,” says Dwayne.

“Me, My Mom, and My First Violin” tells the story of how Jada’s artistic family supported and influenced her musical career, and the dedication and commitment it takes to be successful. In the book, Jada’s violin teacher Amy Beshara teaches her to take chances and develop self-confidence.

“Jada’s story is about how developing her skills playing violin helped her believe in herself and led to her winning a competition. All of the books in the series encourage children to follow their dreams and apply what they learn to achieve success for the rest of their lives,” says Clark.

Future books in the Clark Family series will include a family trip to visit their grandparents, their aunt’s beauty shop and how it became a neighborhood gathering spot, the empowerment of theater, expressing yourself as a singer, and more. The books are available on Amazon and ClarkFamilyBooks.com.

Dwayne and his wife Janeece Freeman Clark met during the Broadway production of Urinetown. Janeece leads the musical theatre department at New Jersey Performing Arts Center. She also co-founded the Vanguard Theater Company, where she serves as Artistic Director.