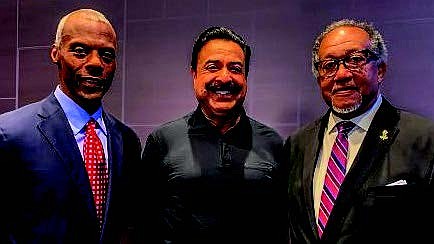 NNPA President and CEO Dr. Benjamin F. Chavis, Jr. (pictured at right), who participated in the recent teleconference, said the NNPA’s partnership with the BNC is a profound win-win for Black America. (Also pictured are Former Republican U.S. Congressman J.C. Watts, chairman of BNC (left) and Jacksonville Jaguars owner, Shad Khan, who is a primary investor in the new network (center).

In a joint teleconference broadcast live from the Four Season’s Hotel in New York’s Financial District, the Black News Channel (BNC) and the National Newspaper Publishers Association recently announced the official launch date and time for the nation’s first 24-hour, 7-days a week all-news TV channel that will focus on African American news.

The potential for the network appears almost limitless.

BNC will immediately have the potential to reach 33 million households daily in all the major media markets across the nation.

Combined with the millions of readers who consume information from NNPA’s Black-owned newspapers and media companies each week, the BNC could quickly become the top destination for all who want to consume African American news on TV and on mobile devices.

Tallahassee, Florida, houses BNC’s headquarters, and the network will have news bureaus around the country, including Washington, D.C. and New York City.

“This platform will create a venue for the African American community to have a dialogue to talk about news, education and cultural things,” stated Watts, who added that the network has been in the planning stage for many years.

NNPA President and CEO Dr. Benjamin F. Chavis, Jr., who participated in the teleconference, said the NNPA’s partnership with the BNC is a profound win-win for Black America.

“This year marks the 192nd year of the Black Press of America. Black Americans striving for excellence in all fields of endeavor give life to our culture that attracts and impacts all people. We set trends for ourselves and others,” Chavis stated.

“We’re not a cursed people, and we are a blessed people. We continue to strive for excellence, and to have Shad Khan announced as a primary investor for the launch and sustainable development of the BNC is of major significance,” Chavis noted.