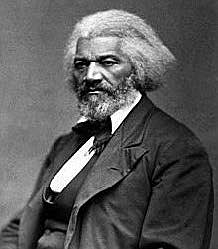 American Writers Museum recently announced its special exhibit Frederick Douglass AGITATOR has been extended through May 31, 2019. “Frederick Douglass (pictured) escaped slavery to become one of the most eloquent voices of abolitionism and his words remain a touchstone for anyone fighting inequality or pushing America to fulfill its promise of ensuring equality for all,” says American Writers Museum president Carey Cranston.

American Writers Museum recently announced its special exhibit Frederick Douglass AGITATOR has been extended through May 31, 2019 due to the popularity of the exhibit and the continued relevance of Douglass’s words and activism.

Frederick Douglass-themed tours will also be offered twice daily throughout the month of February. In addition, for the remainder of the school year, the Museum’s youth education program Write In will subsidize the cost of bus transportation for students from qualifying schools. Adding to the experience, each 6th – 12th grade student who visits the Museum will receive a complimentary copy of Frederick Douglass’ 1854 memoir Narrative of the Life of Frederick Douglass, an American Slave, on behalf of Allstate’s generous sponsorship.

The Write In program gives middle and high school students, in predominantly low income schools, an opportunity to experience American literature through immersive, multimedia exhibits. The 90-minute field trip program encourages students to explore their creativity and boosts their confidence when it comes to reading and writing. Students from more than 75 Chicago Public Schools have visited American Writers Museum through the Write In program. Educators, parents, and students interested in learning more about Write In and whether their school qualifies for free admission and bus transportation, may contact 312-374-8790 or education@americanwritersmuseum. org.

Frederick Douglass AGITATOR features Douglass’ personal artifacts including his inkwell and eyeglasses, excerpts from his speeches and writings, and an original copy of The Reason Why pamphlet he and Ida B. Wells distributed to protest African- American exclusion from the 1893 World’s Columbian Exposition. The exhibit focuses on Douglass’s wide-ranging activism and explores the persuasiveness techniques of his writing, all the while reminding visitors of the power of literacy.

“In his 1845 memoir, Narrative of the Life of Frederick Douglass, an American Slave, he described learning to read as his ‘pathway from slavery to freedom’,” says American Writers Museum president Carey Cranston. “Frederick Douglass escaped slavery to become one of the most eloquent voices of abolitionism and his words remain a touchstone for anyone fighting inequality or pushing America to fulfill its promise of ensuring equality for all.”

During Black History Month, the Museum’s fun and engaging Storytellers will guide visitors on 20-minute Frederick Douglass- themed tours through the Museum. On these tours, visitors will learn how Douglass’s writing affected the nation, and why his words continue to be relevant today. Along the way, they’ll explore the abolitionists who came before Douglass and the impact they had on him, as well as the writers who were influenced by Douglass and how their writing carried his activism forward. Guided tours take place every day at 12:30pm and 3:30pm throughout the month of February.

An upcoming program offered in conjunction with Frederick Douglass AGITATOR is a lecture with Tom Chaffin, author of Giant’s Causeway: Frederick Douglass’s Irish Odyssey and the Making of an American Visionary on March 13 at 6:30 p.m.

American Writers Museum is the first museum solely devoted to celebrating American writers and their works. Opened to the public in 2017, its mission is to engage the public in celebrating American writers and exploring their influence on our history, our identity, and our daily lives. Several permanent exhibits, interactive displays, and specially curated installations offer visitors of all ages a one-of-a-kind experience. Past installations include Laura Ingalls Wilder: From Prairie to Page which highlighted how Ms. Ingalls Wilder’s Little House series shaped American understanding of the time period and The Beat Journey: Jack Kerouac’s “On the Road” featuring the display of the original scroll manuscript.

American Writers Museum is a 501(c)(3) not-for-profit organization and is open seven days a week. Admission is $12 for adults, $8 for seniors and students, and free for children ages 12 and under. Visit American- WritersMuseum.org or call 312- 374-8790 for more information.