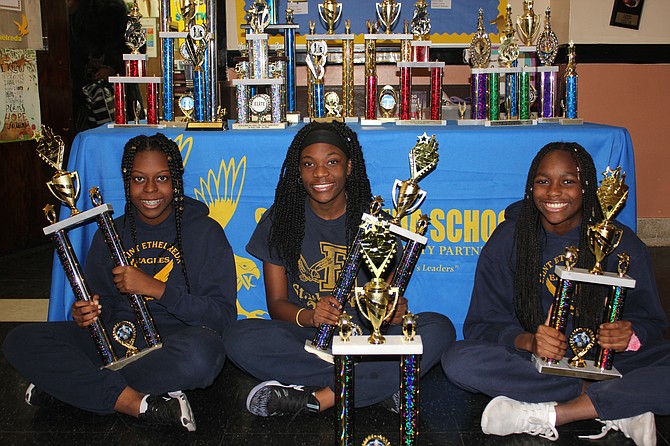 Long before St. Ethelreda School in Auburn Gresham won first place in the state championship, one black McDonald’s owner was making space for chess players at his South Side restaurant.

Lance Jones said he loves the game of chess even though he is an amateur player. And Jones said he loves to give back to the community and that is why five years ago, he began reserving tables at his restaurant, 9560 S. Halsted St., from 5 p.m. to 8 p.m. on Fridays and Saturdays for chess games.

“You’d be surprised at the number of people that show up to watch and play chess. Sometimes, there are as many as 30 people watching youth and adults play a friendly game of chess,” said Jones, 60. “What I do is give the community accessibility to utilize my restaurant to compete against one another but in a safe environment.”

This was also how Jones first met St. Ethelreda’s Shakira Luster, Trechelle Williams and Imani Hill, who each placed in the top 10 at last month’s Illinois All-Grade Tournament in Peoria. By doing so, it also made the school number one this year in the state.

“Their coach brings them into the restaurant sometimes to practice and that is how I met them and got to learn more about their ambition to play the game of chess,” added Jones.

The husband, father and grandfather also owns a McDonald’s at 29 E. 87th St. and 1443 E. 87th St. When Jones is not working, he said he enjoys volunteering at Sheldon Heights Church of Christ, 11325 S. Halsted St., where he serves as a deacon.

“God says help everyone including those you do not know, and that is how I try to live my life,” said Jones. “I truly believe that if you want to be blessed and stay blessed, you should be a blessing to someone else.”

For Luster, Williams and Hill they collectively said becoming state champs and receiving so much recognition has been overwhelming but refreshing.

Luster, a 13-year-old eight grader, first joined the chess team when it started while she was in second grade at St. Ethelreda where she has attended since kindergarten.

“My dad, who is our chess coach, forced me to join the team. Initially, I did not want to play chess because I thought it was boring but now I love it,” said Luster. “People might not think about elementary girls playing chess but we do.”

Williams, a 14-year-old eighth grader, said she too thought it was boring but was encouraged by Luster to join.

“She kept asking me to join so I reluctantly did so as a friend and ended up liking it more than I could have imagined,” recalled Williams, who also first joined the team in kindergarten.

For Hill though, it was at the encouragement of her parents that she joined.

“They were super excited about me joining the chess team because they said it would help my critical thinking skills and they were right,” said Hill, a 14-year-old eighth grader who first joined the team in fifth grade.

One thing, Williams said she noticed at the state tournament, was so few black players.

“This was a state tournament attended by schools from all over the state and most of the players were white and boys,” she said. “I would like to see more African Americans at the tournament next year and hopefully with us winning this year it will encourage more girls especially African Americans to participate in chess.”

All three girls said they would like to attend either Marist or Whitney Young High Schools and plan to continue playing chess after graduation next year. It is a goal their coach Eric Luster, who is also an eight grade math and science teacher at the school, said he wants for his players.

“Our chess team is for students in kindergarten through eighth grade and the goal from day one is to provide students with an extra-curricular activity that’s both fun but also educational,” explained Eric Luster, whose daughter is Shakira Luster. “Research has shown that playing chess can improve a person’s critical thinking ability, so if parents want their child to be better in math, they should have them join a chess team.”

Eric Luster added that due to funding he was not able to bring the entire chess team to last month’s tournament, but is hopeful next year a corporate sponsor will step forward to help.

“We could use all the help we can get to make sure these kids don’t get discouraged because they were unable to attend the state tournament,” he said.

St. Ethelreda, 8734 S. Paulina Ave., became the first all-black elementary school in Illinois to win a state chess championship, according to Denise Spells, the school’s principal. Inside the school’s main office are more than a dozen chess trophies students have won over years in tournaments.

“People need to know about us and our 260 students we currently have enrolled here. Chess is the most participated after school activity at St. Ethelreda and I think it’s because students see the success other students are having with it,” said Spells. “But we’re more than chess here, we are all about educating children and preparing them for life.”