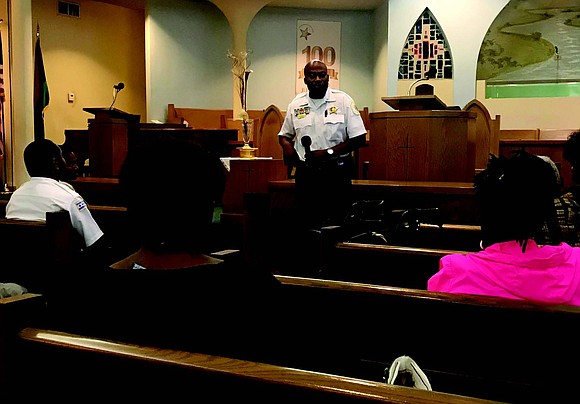 Commander Boyd just completed his second full month with the 2nd police district. Boyd has 28 years of police experience as a tactical officer, an undercover officer in narcotics, a homicide detective, an internal affairs officer, and before becoming a police commander, he served as a supervisor in many of those same divisions where he worked as an officer.

As commander, Boyd said his goal is to ensure all the citizens of the second district are safe. If residents want to, “go to the park or go to the mall you shouldn’t have any fear of leaving your home in the 2nd district. However, that’s not the case. We have issues here and I’ll be quite frank, our number one problem here is gang violence.” said Boyd.

The Chicago Police Department has deployed several state-of-the-art resources to combat violence in the area but Boyd said that the police are only one piece of the solution.

“I think the first thing we need to understand is that it’s more than just a police problem, it’s a community problem so we all have to come together and go to beat meetings, do our community service, and if you see something report it immediately. That’s how we resolve this. Everyone needs to be on the same page because if we don’t act and don’t say anything what’s going to happen? We are all going to be prisoners of our own homes,” said Boyd.

During the meeting, Boyd detailed three specific technological resources that are being utilized in the district. The Strategic Decision Support Center serves as a command center for the district and is a place where officers can remotely monitor live surveillance cameras in high crime areas. The Hunch Lab at the Center uses algorithms to calculate where crime is likely to occur, and Shot Spotters notifies police of gunfire in the area.

Aside from technology, officers are also making more traffic stops on streets that are known to be high crime areas like King Drive, 47th Street, 35th Street, 51st Street, and Cottage Grove Avenue, according to Boyd.

“It’s effective and we know that traffic stops do deter crime because it alerts everyone that the police are present and they are active. That’s what is most important, that people know we are active and not just sitting around at Dunkin Donuts. We are being proactive and trying to prevent crime,” said Boyd.

Compared to this time last year, crime in the 2nd District has seen a slight decrease, according to Boyd who asked residents to just give him a little time to do even better as the new 2nd District Commander.