Can Bronzeville’s Rich Black History Be Preserved In New Developments? 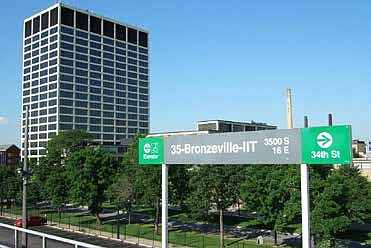 For nearly a century, Bronzeville has been regarded as the Black Metropolis of Chicago. Several development projects are currently underway in the neighborhood. Third Ward Alderman, Pat Dowell says the projects are focused on preserving and amplifying accomplishments of past and present residents. Photo Credit: Yusuke Kawasaki

Can Bronzeville’s Rich Black History Be Preserved In New Developments?

For nearly a century Bronzeville has been regarded as the Black Metropolis of Chicago. The neighborhood was home to roughly 300,000 black people from 1920 to 1950 and was the epicenter of African American culture and business in Chicago during that time, according to WTTW Chicago Public Media series DuSable to Obama: Chicago’s Black Metropolis.

There are two key factors that contributed to the high concentration of black people in Bronzeville during this time. One being the great migration, a span of time between 1916 and 1970 where approximately seven million African Americans moved from southern states to the north, and the second being racially restrictive housing covenants which prohibit the purchase or lease of housing in certain areas by a particular group of people, usually African Americans, according to the Encyclopedia of Chicago.

Sherry Williams, founder, and president of the Bronzeville Historical Society remembers her parents and grandparents telling stories of the great migration when they came to Chicago from Mississippi and settled in Bronzeville.

“When my family migrated to Chicago in 1942, they lived in Bronzeville, mostly because of the restrictive covenants. Illinois had state statutes that prevented blacks from moving outside of certain communities,” said Williams.

Through her work, Williams has been able to interview many people who had stories similar to her family’s. Of the many people she has spoken to about the history of Bronzeville, she noticed that they all have one thing in common.

With the end of the racially restricted housing in 1948, many upper and middle-class families moved away from Bronzeville to different parts of the city, according to the WTTW Chicago Public Media series DuSable to Obama: Chicago’s Black Metropolis.

Today Bronzeville is attempting to rebuild the strong economy that left with the middle class in 1948. Several development projects are currently underway in the neighborhood.

she has been focused on preserving and amplifying the legacy and accomplishments of past and present residents of Bronzeville through these new projects.

One of her goals is to make sure that African American builders are included in the process.

Another acknowledgment made by the Alderman is that the median income of the community needs to be raised, this means adding more upscale housing options in addition to maintaining the public and affordable housing that already exists in the area.

“In order to move the needle in this community to be able to attract the retail that people would like to see and the new pedestrian focused and locally owned businesses to the Bronzeville community, we have to increase the population in the community and increase the income in the community. There is already a very rich supply of public, low income, and affordable housing in Bronzeville and what we are missing is the moor market-rate housing,” said Dowell.

The third point she makes is that she wants to see black-owned business thrive in Bronzeville.

Like the Alderman, Jackson has a positive attitude about the changes coming to the neighborhood and thinks that Bronzeville will be able to maintain it’s strong African American history and culture.

That position I think will not change and it will still be called home by many blacks in years to come,” said Williams.