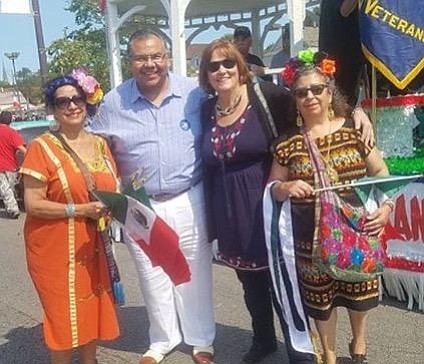 The group’s President Carmela Vargas said, “The parade was a success and we would like to thank Thornton Township for its participation and support.” Mexican Patriotic Club celebrated its 78th Annual Mexican Independence Day Parade of South Chicago

Grand Marshal Melissa Perez, Producer at WCIU (The U) Television Station waved to the crowd as they marched down the parade route.

Vargas further stated, “The parade exceeded her expectation and she is looking forward to next year’s parade.”

What is Hispanic Heritage Month?

National Hispanic Heritage Month is from September 15th through October 15th of each year recognizing the contributions made and the important presence of Hispanic and Latino Americans to the United States by celebrating their heritage and culture. This is the anniversary of independence for 5 countries: Costa Rica, El Salvador, Guatemala, Honduras, and Nicaragua.

Mexico’s Independence Day is September 16th, Chile’s Independence Day is September 18th. October 12th is “El Dia de la Raza” or “The Day of the Race” a day celebrating the many nationalities present in the history of Mexico, Central America, and South America including Native Americans such as the Mayas, Aztecs and Incas; and European nationalities such as Spanish, Portuguese, and French.