60 Percent of Employers Plan to Hire Full-time, Permanent Employees in the Second Half of 2017 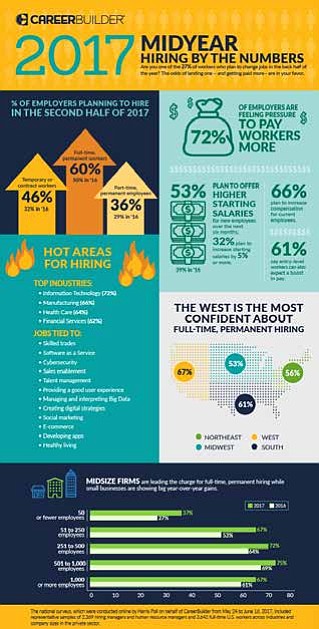 60 Percent of Employers Plan to Hire Full-time, Permanent Employees in the Second Half of 2017 CHICAGO and ATLANTA - Are you one of the 27 percent of workers who plan to change jobs in the back half of the year? The odds of landing one – and getting paid more - are in your favor, according to CareerBuilder’s 2017 Midyear Job Forecast. The nationwide study reveals a significant year-over-year jump in the percentage of companies hiring full-time, part-time and temporary or contract workers from July 1 through December 31. More than half of employers anticipate offering higher starting salaries for new employees and the majority indicates that bigger paychecks won’t just be for high-skilled workers, they will extend to entry-level workers as well. In the second half of 2017:

46 percent of employers plan to hire temporary or contract workers, up from 32 percent last year

“Events dominating national headlines have had a polarizing effect in the U.S., but most employers remain confident in their outlook for financial growth and plans for hiring,” said Matt Ferguson, CEO of CareerBuilder and co-author of The Talent Equation. “Job seekers stand to benefit not only from having more options, but also from the growing

intensity in the competition for talent. Employers are moving quickly to recruit candidates and they are willing to pay more across job levels. They are also placing a greater emphasis on candidates having a positive experience when they apply to their firms. The current climate puts job seekers in a more

The national surveys, which were conducted online by Harris Poll on behalf of CareerBuilder from May 24 to June 16, 2017, included representative samples of 2,369 hiring managers and human resource managers and 3,642 full-time U.S. workers across industries and company sizes in the private sector.

Information technology (72 percent) is leading the industries hiring in the back half of the year, coming in 12 percentage points higher than the national average for plans to add full-time, permanent headcount. Manufacturing (66 percent), health care1 (64 percent) and financial services (62

percent) are also expected to outperform the national average.

Looking across industries, some of the most in demand

roles employers say they will be recruiting for during this timeframe are those tied to:

Software as a service – 14 percent

Healthy living – 9 percent Which region is hiring the most?

All regions are showing a year-over-year gain in

the percentage of employers expecting to hire full time,

permanent employees in the back half of the year. The West leads with 67 percent of employers planning to add headcount, while the South remains on par with the national average. The Northeast and Midwest came in below the national average, but are reporting healthy increases over last year.

are reporting the biggest year-over-year growth.

Nearly half of employers (47 percent) plan to add full-time, permanent employees in the third quarter, up from 34 percent last year. Seven percent expect to downsize staffs, relatively unchanged from 8 percent in Q3 2016. Forty-three percent anticipate no change and 3 percent are undecided.

workers, up from 37 percent last year.

1 Health Care organizations with 50 or more

*Totals may not equal 100 percent due to rounding or the ability to choose more than one response.

This survey was conducted online within the U.S. by Harris Poll on behalf of CareerBuilder among 2,369 hiring and human resource managers ages 18 and over (employed full-time, not self-employed, non government including 221 HR managers) and 3,462 employees ages 18 and over (employed full-time, not self-employed, non-government) between May 24 and June 16, 2017(percentages for some questions are based on a subset, based on their responses to certain questions). With pure probability samples of 2,369 and 3,462, one could say with a 95 percent probability that the overall results have sampling errors of +/- 2.01 and +/- 1.67 percentage points, respectively. Sampling error for data from sub-samples is higher and varies.