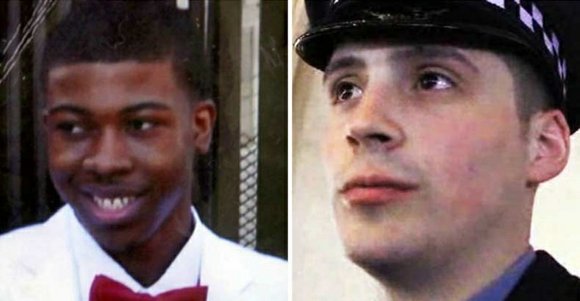 Officer Robert Rialmo (right) filed a lawsuit last week against the estate of Quintonio LeGrier (left), 19, who was shot and killed by Rialmo on Dec. 26, 2015.

A white Chicago police officer who shot and killed an African American teenaged suspect while on a domestic dispute call, is now suing the youth’s estate.

Officer Robert Rialmo filed a lawsuit last week against the estate of Quintonio LeGrier, 19, who was shot and killed by Rialmo on Dec. 26. Rialmo claims that LeGrier came after him with a baseball bat and caused him trauma. And now he’s asking the courts to award him $10 million because of that trauma.

The so-called estate of LeGrier may soon contain a large lawsuit or settlement award from the City of Chicago. That’s because attorney Basileios Foutris filed a wrongful death lawsuit against the city on behalf of LeGrier’s family shortly after he was killed.

Rialmo’s legal action is a counterclaim against that lawsuit.

"After this coward shot a teenager in the back ... he has the temerity to sue him? That's a new low for the Chicago Police Department," Foutris said.

Rialmo’s lawsuit claims that LeGrier swung a bat at him twice, aiming for his head at close range. The suit also says that Rialmo felt that his life was threatened by LeGrier and that is the reason why he shot him.

Rialmo's lawyer, Joel Brodsky, said at a recent news conference that his client is grieving and that officers typically experience grief whenever they fatally shoot someone.

"He's got this extra added burden (with) the death of (Bettie) Jones," Brodsky explained to reporters. "He's going through what I would call the normal grieving process for someone who is forced to take a human life.”

Bettie Jones, 55, a neighbor of the LeGrier’s who was standing in the hallway of the building where the incident took place after answering the door for police officers, was also killed by Rialmo’s gunfire. Her family also filed a wrongful death lawsuit against the city of Chicago.

Quintonio’s father, Antonio LeGrier, who witnessed the chain of events that day, and who is one of the plaintiffs in the LeGrier wrongful death lawsuit against the city, said that his son was of no threat to officer Rialmo because his son was inside the building when he was shot and Rialmo was outside.

Nonetheless, a section of the legal documents filed by Rialmo reads:

“Counter Plaintiff Officer Robert Rialmo prays that this court enter a judgment against the Counter-Defendant Antonio LeGrier as Special Administrator of the Estate of Quintonio LeGrier, and in favor of the Counter-Plaintiff, Robert Rialmo, in a sum in access of $50,000 for actual, special, consequential, and incidental damage, and an additional sum of in excess of $10,000,000 for punitive and exemplary damages, plus Counter-Plaintiff’s costs and attorney’s fees…”

Regardless to who wins or loses in this grim legal battle, one thing is for sure…it’s definitely another huge black eye for the City of Chicago.