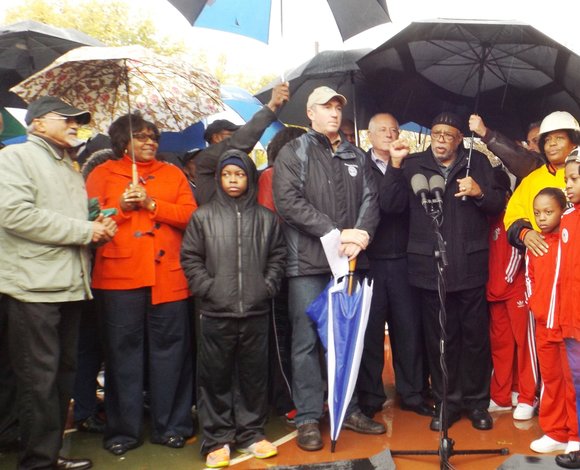 The cold and rain on Saturday did not deter the many who turned out to hear Ill. Gov. Pat Quinn and Chicago Mayor Rahm Emanuel announce a $20 million investment for a new state-of-the art, indoor, track and field facility slated for construction on Chicago Park District land next to Gately Stadium on Chicago’s south side.

Mayor Emanuel and Gov. Quinn were joined by local and state officials for the announcement that took place at Gately Park, 810 E. 103 St.

“If there’s any question about the worthiness of this investment, this is going to pay dividends for a lifetime of young boys and girls who grow up right,” said Quinn. (I) have three letters for them and its JRW (Jackie Robinson West Little League team) because when you have Jackie Robinson West and Kids who are doing positive things and adults giving of their time and being good mentors and volunteers, that’s what it’s all about in life, building a great community. I think it’s very important that we thank our legislators who helped vote for the funding for this. (Ill.) Sen. Donne Trotter (Dist.-17th), (Ill.) Reps., Marcus Evans, Jr., (Dist.-33rd) and Elgie Sims, Jr. (Dist.-34th).”

“This is the Pullman grid, it’s an historic grid and lots of wonderful things have happened here in the past. On behalf of my colleagues and myself, Ald. Anthony Beale, (9th Ward) I want to thank a lot of people that have made today such a wonderful day, starting with the governor.”

Mayor Emanuel spoke, saying, the first time he met Ald. Harris, she was talking about building an indoor track and field center.

“It’s not about the $20 million dollars. More importantly, it’s about our kids missing out on college scholarships. If you have an indoor facility, more of our kids will go on to college and on to the Olympics. We can actually set new records going forward with a facility. The Park District is all in because we’re going to show, never bet against the kids in Chicago, ” Emanuel added.

Rep. Simms told the crowd at Gately Park, “It’s important that we come together as a community. I’m so humbled that we’ve been able to come here and put together this project, $20 million into this community to make this community a better place so that these young people can grow up in a community that they’re proud of. We’re going to continue to fight to bring resources back to this community.”

“It’s about the kids,” Kelly said as he announced some of the schools in attendance at the event.

Dr. Worrill, director and professor of the Jacob Carruthers Center for Inner City Studies, Northeastern Illinois University, 700 E. Oakwood Blvd., provided background on the athletic center endeavor, saying as a former athlete, one of his goals was to connect athletics to academic achievement.

“Over the last 30 years, a group that I headed up called the Friends of Track and Field and another group that I’m involved with, called the Slow Breakers, who are all ex-Chicago Public Schools athletes in their 70s and played football and basketball and ran track and are now retired teachers, lawyers, judges and doctors and everyday workers, meet on a regular basis and have been advocating for many years for building an indoor, state-of-art, track facility that can host international and national track meets and bring track and field back to life in Chicago,” Worrill told the Chicago Citizen Newspaper the day before the announcement at Gately Park.

Worrill thanked all those involved during Saturday’s announcement.