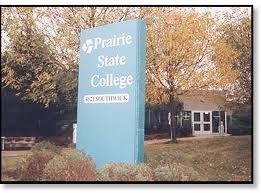 The Prairie State College (PSC) district, 202 S. Halsted St., Chicago Heights, is seeking nominations for one of two community service awards, one to highlight a community member and the other is to pay homage to a PSC college graduate.

To honor these individuals, PSC is accepting nominations for the Dr. James H. Griffith Community Service Award, given to a 2014 PSC graduate. Nominees should be a person or group who has contributed in an extraordinary way to the community. The award is named after former Trustee Dr. James H. Griffith, who served for 25 years on the PSC board of trustees.

The second award is the Michael R. Monteleone Community Service Award, given to a community member of the PSC district. Nominees for this award must be a person or group who has contributed in an extraordinary way to education through community service, as either a volunteer or a community leader. The nominee’s service efforts should be within the PSC district, although additional activities in other areas would be recognized. Also, the nominee should not be employed in the community service or public service field. The award is named after former Trustee and Board Chair Michael R. Monteleone, who served on the board of trustees for 21 years, from 1981 to 2002.

Thousands of people in the Prairie State College district reportedly give generously of their time and talent to help improve the community, so nominations should be plentiful.

Founded in 1957 as Bloom Township Junior College, Prairie State College’s first classes were held in 1958 in the basement of the First Christian Church. Originally established to offer only transfer liberal arts courses and occupational-technical courses, the College was reorganized in 1967 as a Class I junior college. Combining four high school districts into an enlarged territory, the College was renamed Prairie State College.

In 1968, the College was housed in 10 interim buildings on its campus at Halsted Street and Vollmer Road. Construction of permanent facilities began in the fall of 1972 and was completed for the 1975-76 academic year. A vocational-technical addition to the Main Campus Building, housing classrooms and laboratories, was dedicated in August 1979. A new Library, the Christopher Art Gallery and the Community Instructional Center (later renamed the Business & Community Education Center) opened in 1996. In 1998, the Matteson Area Center opened as a convenient off-campus location to accommodate district residents.

The Health/Tech Center, home to the Dental Hygiene, Surgical Technology and Networking programs, opened in 2000. The Fitness Complex, a unique partnership among Prairie State College, the Chicago Heights Park District and St. James Hospital and Health Centers, opened in 2001. Ground was broken in May 2002 for the Adult Training and Outreach Center and Children’s Learning Center; the dedication ceremony was held two years later. The Adult Training and Outreach Center is one of only such buildings in the country dedicated to adult education.

All nominations must arrive at the office of PSC President, Dr. Terri Winfree, no later than June 13.

To receive a nomination form or for more information, call Pat Trost, executive assistant to the president, at (708) 709-3637.