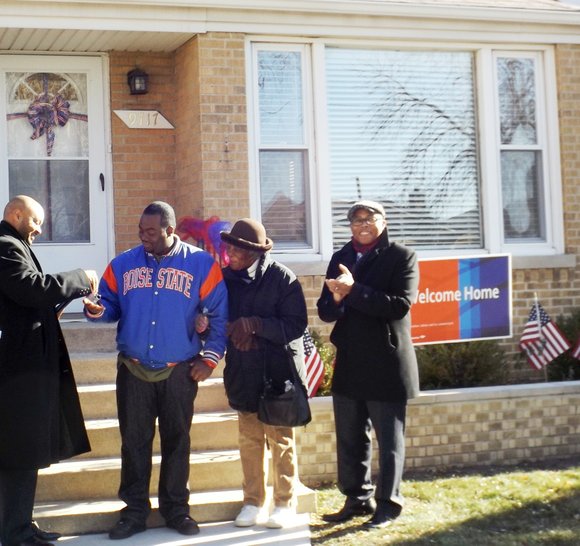 A Chicago military service man was the recipient of a mortgage-free home courtesy of Military Warriors Foundation in partnership with Bank of America as a way to help ease his transition back to civilian life.

A 501(c)(3) non-profit charity, founded by Lt. Gen., Leroy Sisco, (Ret.), in 2007, the Military Warriors Foundation, provides support for the nation’s combat wounded heroes and Gold Star Families as they transition out of the military and into their new civilian life.

This newly renovated bungalow nestled in the Roseland community is now home to wounded, Army Specialist, Renness Jones and his service canine.

Former Army Specialist, Renness Jones, who relies on the help of a service canine, on Friday, received the keys to his Roseland community bungalow. All Renness has to do now is pay the property taxes, insurance, utilities and other expenses related to keeping the house up and running.

Chosen through an application process, Specialist, Jones, thanked Military Warriors Foundation and Bank of America, saying, “I know we put our lives on the line. It’s a great privilege to know that we have someone standing up and backing us when we get home and to donate these homes.”

Born and raised in Chicago, Renness joined the Army in 2005 and served a tour in Afghanistan and in Iraq. After being wounded in Iraq, he returned home to serve an additional year with the National Guard in Aurora, IL.

Renness’ new home is intended to provide him with a solid foundation as he transitions to civilian life and goes back to school.

Will McReynolds, Vice President, Consumer Market Manager, Bank of America, presented, Specialist, Renness, with the keys to his new home as his grandmother, who has about 30 grandchildren, stood by his side.

“My team and I are pleased to be here to welcome (Army) Specialist Renness Jones into his new home and to (also) witness the wonderful work Military Warriors Support Foundation is doing for our service members,” McReynolds said thanking Renness for his service as he explained the Bank of America program history.

Bank of America has a long tradition of serving those who serve our country dating back to 1920.

“In addition to serving more than two million military customer households, we also employ thousands of active service members and veterans, many of whom joined us in the past year. We recognize the challenges veterans face when returning to the civilian sector and established our Bank of America Military Affairs Advisory group, to focus on education, employment, wellness and housing concerns,” McReynolds told those gathered at the site of Renness’ new home.

In Aug. 2012, Bank of America made a commitment to make available up to 1,000 properties by 2014 to non-profit organizations and local government programs that provide homes for military veterans and to first responders and has surpassed its goal, according to McReynolds.

“We’ve reached our 1,000th military home donation more than a year ahead of schedule and we are continuing this program,” McReynolds said, adding the partnership with Military Warriors helps realize stability for families as well as for neighborhoods.

Specialist Renness, currently a postal worker, was also presented with a plague thanking him for his service and bravery for the country.

Chicago Ald. Howard Brookins (21st Ward) was on hand for the presentation of Renness’ new home.

“This area is pretty quiet. We need to get Renness registered to vote. “I want to thank Bank of America for investing in our community and for helping out veterans that we owe a significant debt of gratitude,” said Brookins. “We ask them to do so much and I don’t know how we can ever repay them for their service to our country. Welcome to the 21st Ward. You will be a great addition to our community. We need positive role models like you so that these young kids can grow up and aspire to be like you. God bless you and your family.”

Individuals seeking a home donation should reach out to their community non-profit organizations to inquire about possible availability. Nonprofit groups can contact PropertyDonation@bankofamerica.com for more information.