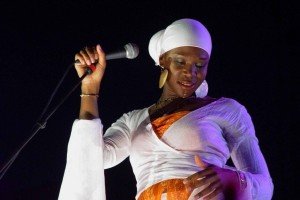 This past Labor Day weekend Washington Park was transformed into an African village for the 22nd annual African Festival of the Arts (AFA). The neighborhood festival is the citys largest with more than 300,000 attendees.

Eleheh was the festivals 2011 theme which means Moving Forward. The term Eleheh is from the West African language of Soninke.

On Saturday evening, the fests second day, rain soaked patrons did not let the weather impede their celebration of African culture.

Spicy aromas of Caribbean, African and African-American cuisine filled the moist air as the crowd gathered around vendors and explored the village.

Many African American entertainers attended the fest including R & B singer Tyrese who promoted his new book How to Get Out of Your Own Way.

India.Arie, Mary Mary and Bootsy Collins joined the list of numerous performers at this years celebration. The musicians played on the Dee Parmer Woodtor Main Stage, which is named for the AFA founders late wife.

Dana Easter was this years featured artist. Her work has appeared in Essence and Upscale magazines. She received her bachelors degree from the Art Institute of Chicago.

A native of Monrovia, Liberia, Woodtor is a successful Chicago business mogul. Woodtor holds a bachelors degree in economics from the University of Liberia and a masters degree in transportation from Northwestern University.

Africa International House is dedicated to the celebration and preservation of African cultures and traditions, with the intentions to pass them on to future generations, Woodtor stated in a July press release. Expectations are there are yet more contributions to be made and celebrated. As the world moves forward, it is most imperative that we too continue to change in synchrony with the times and promulgate the best cultural traditions of African peoples while looking forward and promoting progress.