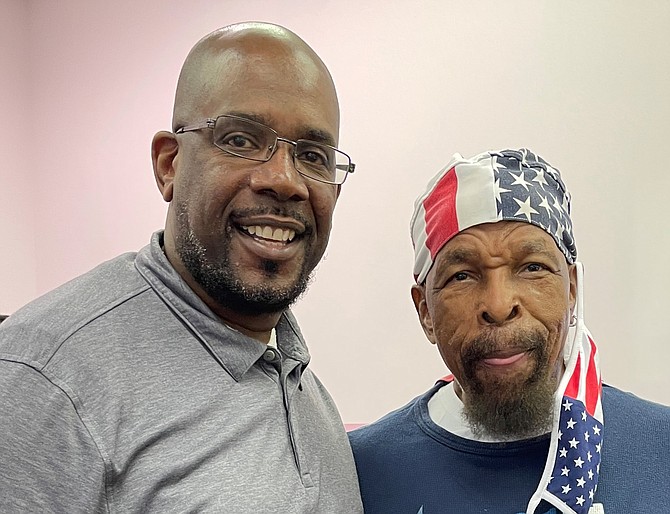 Mr. T on the right and Pastor Clopton on the left


There’s a familiar adage which states that ‘you can’t teach a mature soul new tricks’!  The iconic ‘Mr. T’ begs to differ! In fact, he’s calling any and everyone who has sometimes struggled with their faith during challenging times! There is a unique religious spiritual vision of the word of God coming to Chicago’s Southside! Rev. Dr. Eric D. Clopton, Sr., the Pastor, and membership of the Bronzeville-based Cosmopolitan Community Church are pleased to announce a special ‘Champion of Christ’ with deep Chicago roots will preach a magnificent motivating morning message. Faith Festivities kick off on Sunday, October 9, 2022 at 10:45am, at 5249 S Wabash Ave, Chicago, IL. All are invited!

The guest speaker is the incomparable, powerful presenter and native Chicagoan, Lawrence Tureaud. He is best known as ‘Mr. T’ and his roles as B. A. Baracus, in the 1980s hit television series The A-Team and as boxer Clubber Lang in the 1982 hit film Rocky III. ‘Mr. T’s sermon is referenced from the scripture John 20:24-25 and is entitled, “Doubting Thomas – Doubting Thomas”.

‘Mr. T’ is a Chicago-born entertainment treasure who has continued to evolve throughout his professional career landscape as a multi-faceted expert wrestler, actor, businessman and today as a born-again Christian. The opportunity to celebrate his profound humanistic legacy is indeed a blessing,” says Cosmopolitan Community Church’s Senior Pastor Clopton, pictured left with ‘Mr. T’. “We are excited to invite our members, local residents and visitors alike to partake in the exhilarating, faith-oriented programming we have in store on this upcoming Sunday, October 9th!”

Also widely recognized for his notable, distinctive hairstyle inspired by West African Mandinka warriors, his once, but no longer worn copious gold jewelry, his tough-guy persona and especially by his trademark catch-phrase "I Pity the Fool!", first uttered when he appeared as Clubber Lang in the  3rd version of the highly popular movie franchise called Rocky III. ‘Mr. T’ successfully turned the phrase into his hallmark brand which still rings with his multitude of worldwide fans and supporters of his movies such as ‘D.C. Cab,’ and numerous television appearances on NBC’s ‘Games People Play’, ‘Saturday Night Live’ and sitcoms such as ‘Silver Spoons’, ‘Diff’rent Strokes’,  ‘Dancing with the Stars’ in 2017 and other series.

In recent years, following a cancer-related health scare, ‘Mr. T’ pivoted his life to adhere to his new-found calling: becoming a sought-after public speaker and spiritually-focused advocate to promote, raise awareness, and expand appreciation for what he calls ‘the power and promise’ of Christianity. He also gained an internationally-known reputation for helping those in need.

Born and raised in the former Robert Taylor Homes on the south side of Chicago with his parents (his father, Nathaniel Tureaud, was a minister) and the youngest of eleven siblings, Lawrence Tureaud aka “Mr. T’ attended Dunbar Vocational High School, where he studied martial arts, played football, wrestled, becoming the citywide wrestling champion two years in a row. After winning a football scholarship to the historically Black Prairie View A&M University, he majored in mathematics, but left following his first year. The former U.S. Army veteran started his career as a Chicago Rush Street nightclub bouncer, where he adopted the moniker “Mr. T”, eventually becoming a noted bodyguard for such entertainment luminaries as Steve McQueen, Michael Jackson, LeVar Burton, Diana Ross, and many others, as well as heavyweight champion boxers such as Muhammad Ali, Joe Frazier, and Leon Spinks.

This talented ‘Southside Son of Chicago’  - ‘Mr. T’ went on over the years to revolutionize various entertainment genres, including the world of televised pro wrestling. He was Hulk Hogan's tag-team partner at the World Wrestling Federation's (WWF) WrestleMania I which he won and also worked with “Rowdy” Roddy Piper and others, eventually inducted into the WWE Hall of Fame. He’s also made commercials for major national companies and hosted his own short-lived series,

Today, ‘Mr. T’  cheerfully admits that he has experienced a dramatic Christian rebirth at this stage of life. Years ago, he stopped wearing virtually all his gold, one of his trademark identifying marks, after helping with the cleanup and experiencing the devastation caused by Hurricane Katrina in 2005. He stated, "As a renewed Christian, when I saw firsthand other people losing their lives, losing their families, land and property ... I felt that it would be a sin before God for me to continue wearing my gold. I felt it would be insensitive and disrespectful to the people who lost everything in the twinkling of an eye, so I stopped wearing it. It no longer defined who I was or am.” He supports various charitable endeavors for children, youth education and at-risk, economically displaced, and homeless individuals and families.

“There’s no need to try and navigate a seemingly murky future in lonely despair when we have God at our side,”  enthusiastically expresses ‘Mr. T’. “All you, I, and each of us must do is stop worrying and doubting - - instead completely trust, accept and believe in the salvation of God’s word. Despite unexpected challenges and difficulties, we all face at points in our lives, I feel blessed every day and so can you! Please join us on the morning of Sunday, October 9, 2022, 10:45am sharp at Cosmopolitan Community Church as we share the good news of God’s grace and mercy!”