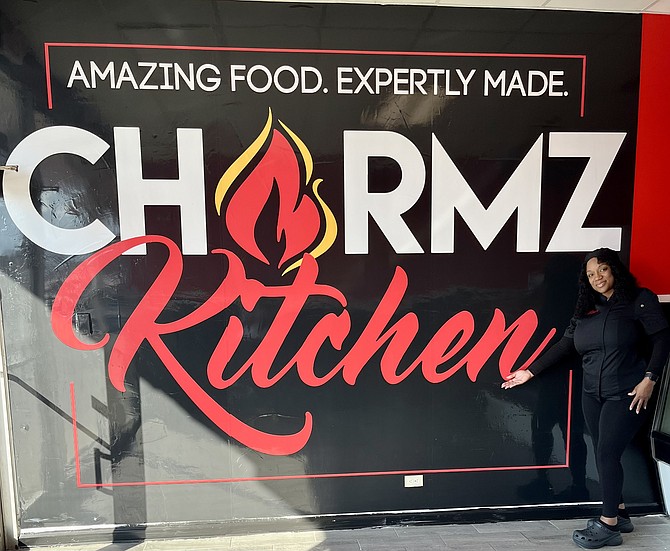 The City of Country Club Hills is overjoyed that popular African American female Chef and CEO of the popular Charmz Kitchen, Charmaine Candler, has chosen to officially open her new restaurant at the northwest intersection of 183rd and Cicero. (4558 W. 183rd)

The all-new restaurant will highlight its popular southern cuisine and signature “Egg Rolls” to its thousands of followers and future patrons in a totally renovated eatery in which Ms. Candler now calls her new headquarters. The Charmz Kitchen brand was started four years ago within the ACES Bar and Grill. From its inception, the business flourished and was immediately handicapped by the limited space. Even with a high performing catering operation, Charmz Kitchen became overwhelmed by walk in traffic and call-in orders.

“We are pleased to welcome Charmz Kitchen to Country Club Hills. Given the past success of Chef Candler's business model, we are encouraging our residents to patronize her new location. Offering diverse forms of eateries is a welcoming attraction for any town. Surely the Charmz Kitchen menu selection will allow our residents and visitors great options in satisfying their taste buds.” says Country Club Hills Mayor James W. Ford.

Churches, government bodies, civic organizations, weddings, and other event/groups have continued to contract the Charmz catering service. Many have voiced their pleasure and enthusiasm concerning the delicious meals and the spirit of excellence in customer service that the Charmz staff provides daily.

Charmaine Candler, also known as Chef Charmz, began her journey of cooking at an incredibly young age. She coalesced the well-regarded cooking skills of her elder relatives from the south which includes talented and superior cooks from the states of Alabama, Mississippi, and Georgia.

In 2018, Charmain Candler birthed her business by leasing the kitchen of the the Aces Bar and Grill. It was there where she achieved enormous revenue streams, continued to update the menu seasonally and incorporated her southern heritage in all of her dishes. Candler’s vast menu of southern and international comfort food ranged from her unique egg rolls, to fried chicken and to southern styled greens.

As the owner and creator of Charmz Kitchen & Catering, Chef Charmz has become a household name to many southern Cook County residents who have flocked to her business to purchase her unique blend of foods. She began preparing egg rolls just as an appetizer. However, she created an extraordinary blend of spices and labeled them “Charmz Rolls.” In addition, Candler became known for her Philly Steaks, Philly Chicken, Buffalo Chicken and Jerk Chicken.

After three successful years of business, the Charmz brand has attracted a high volume of loyal customers, a huge social media following, and an affluent mix of politicians, clergy and community leaders who all advocate her delicious variety of meals.

“I first became acquainted with Ms. Candler and her soulful cuisine over two years ago while attending a ministers’ conference. Her catering operation was second to none. But moreover, her delicious variety of foods was no short of brilliant. Her steaks, salads, and Charmz egg rolls was a favorite at our event. I encourage all Cook County residents to embrace Ms. Candler and support her wonderful food establishment” says Bishop Larry D. Trotter.

Chef Charmz was approached by many business leaders and elected officials who attempted to recruit her to a variety of municipalities to launch her new restaurant. But Chef Charmz felt compelled to remain in Country Club Hills where hundreds upon hundreds of her followers have been accustomed to patronizing her business.