Census estimates show state lost more than 113,000 in one year 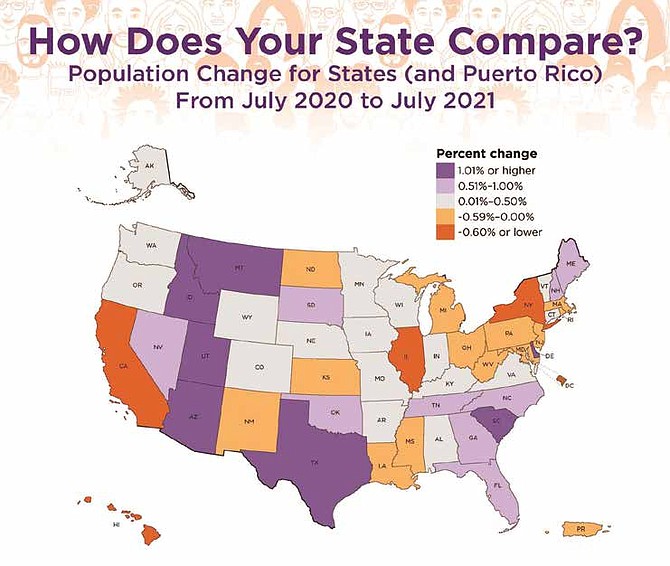 Those losses were offset by a net gain of 5,766 people through niternational migration as well as a “natural” increase of 2,778 people – the difference between in-state births and deaths during the period.

The Census Bureau routinely estimates national, state and county populations each year following a decennial census using a variety of data sources. But those estimates have been off in the past.

“Population growth has been slowing for years because of lower
birth rates and decreasing net international migration, all while mortality
rates are rising due to the aging of the nation’s population,” Census
Bureau demographer Kristie Wilder said in a news release. “Now, with
the impact of the COVID-19 pandemic, this combination has resulted in a historically slow pace of growth.”

The estimates showed that both the Midwest and Northeast regions
saw net population declines over the year while the South and West
regions both gained population.

Between 2020 and 2021, 33 states saw population increases and 17
states and the District of Columbia lost population. 11 of which had losses of more than 10,000 people. This is a historically large number of states to lose population in a year.

On a percentage basis, Illinois had the third largest population decline,
behind the District of Columbia, at 2.9 percent, and New York, at
1.6 percent. Idaho, Utah and Montana had the largest percentage increases.

On a numeric basis, Illinois also had the third largest population
decline, behind New York and California. Texas, Florida and Arizona had the largest numeric population increases.

Capitol News Illinois is a nonprofit, nonpartisan news service
covering state government and distributed to more than 400 newspapers statewide. It is funded primarily by the Illinois Press Foundation and the Robert R. McCormick Foundation.