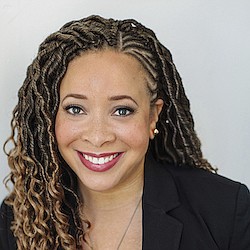 Morgan Phelps is the founder and CEO of Colorful Connections, a firm that assists organizations in building and retaining racially inclusive teams. Photo provided by Vanessa Abron

BY TIA CAROL JONES
Morgan Phelps founded Colorful Connections, a diversity, equity and inclusion firm after her experiences in the workplace.
Phelps worked in a traditionally homogenous industry of the agency world. She said there was a lot of talk about inclusion and diversity, but there was a disconnect when it came to action.
Phelps said if a client had asked to create a structure for diversity and inclusion, a company would work to figure it out. But, within its own infrastructure, those changes were not taking place.
“I was kind of frustrated with a lot of the internal politics that you’re seeing, and lip service and gaslighting and just after a certain point, enough became too much,” she said.
Phelps said she was in the position and had the opportunity to do something about it, and that is where Colorful Connections came from.
Colorful Connections provides recruiting support, trainings, workshops and coachings, as well as assessments. Colorful Connections also has career coaching for professionals and a network for job seekers.
Phelps said that advertising, PR and communications industry are an example of industries that need help and transformation. She added, tech, legal, film also need help when it comes to diversity, equity and inclusion.
“There’s so much disparity. And, when you’re thinking of the dimensions of diversity, too, I think that’s important because not everyone acts, thinks, looks and behaves the same way,” she said.
At Colorful Connections, Phelps said she tries to get business leaders to latch onto what the business needs. She said oftentimes they want to do something, and want to do the right thing, but it can be tied to a fleeting desire or one leader. She added, those campaigns or projects don’t last because they don’t “have teeth” or connection to the business strategy because people in the company don’t understand the need for it because it doesn’t hit on the business level.
“For all these different industries, where there is a homogenous representation, meaning from gender to race to thinking to socioeconomic background to having similar pedigree, this is not what the world looks like, nor is this the type of world the majority of companies are trying to market to,” she said.
Phelps added, research shows that if at least one member of a team represents the target and the user, the company is 150 percent more likely to innovate accordingly. She said they try to stress what is a longstanding sustainable solution to create change. She said it is necessary that everyone in the company understand that diversity, equity and inclusion are important to what the business needs.
Phelps said people have seen a one-time program, like Black History Month programs, but those same companies might not do anything throughout the rest of the year to acknowledge the accomplishments of the diverse staff.
Phelps said during the past year, there have been statements from corporations about their dedication to diversity, equity and inclusion and being racially inclusive, or implementing different programs or philanthropic efforts, but it is not clear if those are sincere. She said job seekers should do their research, look beyond the corporate statements and take time to look at company reviews and social media.
“You’ll be able to get a temperature check on is this company, first off, aligned with what I want out of my career, is this the type of work I enjoy doing, is this role in the company aligned with my trajectory? If so, great, then continue moving forward. Then, as you’re looking at what the company does for their client with the work they do, what are their values, their mission statement, the vision statement,” she said.
Phelps also said to look at the team on the company’s website. If a person doesn’t see anything about representation, continue to go forward. She said it is time during the interview to ask about representation and DEI. “You’re interviewing your hiring manager and other members on their team just as much as they’re interviewing you.       This should be a part of your line of questioning,” she said, adding to ask questions based on the research done about the company. “Ask them those hard questions that hopefully they’re having talks about internally and they would have an answer for you during the interview.”
For more information about Colorful Connections, visit www.colorfulconnections.com.