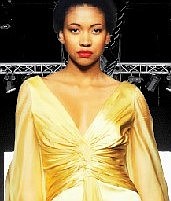 On February 16, 2021, The leading emerging designer runway show established to be a catalyst and provide a platform for designers, will celebrate its 10th Anniversary during New York Fashion Week with a virtual fashion event. The Show themed “A Decade of Diversity on the runway” will feature top emerging designers from the United States as well as Africa. The virtual event will stream on GFNTV.com and on www.Emergerunwaynyc.com 6:00PM CST/7:00PM EST. GFNTV is a premiere online video network, which also streams live on various platforms including ROKU & Apple TV. The virtual fashion event will be hosted by Claire Sulmers of Fashion Bomb Daily, with special guest presenters Andre’ Leon Talley (former Vogue contributor) & Fern Mallis (creator of New York Fashion Week.)
The virtual event will also feature congratulatory remarks from fashion & style notables, a performance by Yanna Cello, a look back over the 10 year history of Emerge!, special clips from Emerge! Design Talk featuring London-based designer Ozwald Boateng, urban street wear designer Karl Kani & iconic model Pat Cleveland.
Each season, EMERGE! presents the coveted 'Fashion Innovator Award.’ An honor to those who have received the award in the past recognizing them for their impact in fashion. Past honorees have included: Audrey Smaltz, President of the Ground Crew (presented to her by Harriette Cole); Constance C.R. White, Editor in Chief of Essence Magazine (presented to her by Tracy Reese); Andre’ Leon Talley, contributing editor of Vogue (presented to him by Diane Von Furstenberg), Fashion Icon Mikki Taylor (presented to her by Style Expert Philip Bloch), legendary model Patricia Cleveland (presented to her by legendary fashion designer, Stephen Burrows) and Fern Mallis (presented to her by Bibu Mohapatra). This year’s Fashion Innovator Award Honoree is celebrity stylist & “image architect” Law Roach. Law will be recognized for his impact in shaping the global fashion industry.           This season Emerge! will feature a talented list of designers who were selected to unveil their newest collections. Terri Stevens of funkinbeautiful Designs (Chicago), Scalo Designs (Johannesberg), Jesu’ Segun London, Orla Couture (Lagos, Nigeria), Haus of L.A. (Los Angeles, Chicago). The runway will be “Reimagined” and feature the designs in creative vignettes. “I am so excited about the upcoming anniversary show,” says Dionne Williams, creator & producer of Emerge! Fashion Show, “When I created Emerge 10 years ago my purpose was to highlight the creativity and art that designers create for the runway. I am always at awe at the talent and gifts that designers bring to light.”
Emerge! hosted a live show before the pandemic shut down and to say the year 2020 was a challenging one is an understatement. But, when met with challenges, creators create. It’s just what they do. They adapt, originate, overcome and birth new concepts. One shining example of this spirit to create will be found in this innovative virtual runway presentation. The Show is filmed & produced by The MTut Group. Sponsors for the show include AMBI, Port Authority of New York & New Jersey, LAMIK Cosmetics & ORS Haircare. To register for free access to the virtual event visit www.EmergeRunwaynyc.com or visit www.GFNTV.com the day of the show.