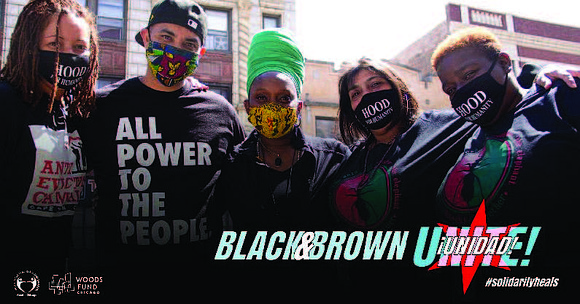 Healing circles have long been a way for people to come together and express themselves with the hope of unburdening themselves and being healed.

Truth, Racial Healing and Transformation has been conducting healing circles virtually due to COVID-19. There have been 300 virtual healing circles since the pandemic began. The organization is also looking to train more circle keepers.

In 2017, Christopher launched an initiative to start conversations in almost 20 cities to reckon with the legacy of racism.

“The methodology that she created that we are using across the country is a racial healing methodology that acknowledges that racism has harmed us all, both individually and in our organizations and institutions,” Rico said.

He continued: “And, that it affects our ability to relate and value one another and really creates this false hierarchy that has stated for hundreds of years in this country, that white people are better and that whiteness is supreme to others and frankly, has also made a very clear anti-Black agenda and anti-Indigenous people agenda.”

Rico said racial healing circles address this hierarchy and allow people to share their personal stories. They also help people to see each other for who they are, allowing people to have conversations.

Rico said racial healing practitioners, Pilar Audain-Reed and Steven Rosado, and others are able to reconnect with humanity, celebrate resilience and develop accountability practices to tackle racism within communities, families, organizations and systems. Truth, Racial Healing and Transformation has been doing this work in Chicago since 2018.

Audain-Reed added it’s important for people—now more than ever, to recognize their commonality, especially Black and brown people and “to come together and really express what’s been bottled up inside, express the atrocities, express the day-to-day ongoings,” and what it means to be Black in America right now, she said. “The circle process is very crucial. It’s a free and open and safe space for Black people, brown people and even white people to come together amongst their own peers and really discuss what racism looks like today in our society.”

Audain-Reed said affinity circles have really been the focus of Truth, Racial Healing and Transformation and allow people to come together and talk about their role in the racial construct. It’s been a really amazing process so far, she stated. “One of the things I love most is it provides a platform for us to see ourselves in one another. To really see the things we might have thought were so different about ourselves,” she added. “The Black and brown communities are so incredibly diverse with the ethnicities that exist and there are so many stigmas that we all know have been out upon our community through divide and conquer. What I love most is our ability to see ourselves in one another, to see our common struggle so that we can see that we are better and stronger together.”

Rosado said for the young people, the circles are radically different than those for adults because young people’s experiences are so different in how they navigate the world.

“I think that is the biggest piece that is being brought into the circles. That understanding and that grounding that the circle’s really about bringing in our own individual experiences, but they connect in our humanity through those experiences,” he said.

Rico said with the virtual healing circles, he hopes empathy and the ability to be in relationships with other people result in the suffering of the most vulnerable, never happening again.

During the virtual healing circles, Rosado said one of the young people brought up the idea that Zoom eliminated the hierarchy and subordination because everyone appears in a box that is the same size.

Rico went on to say that since the pandemic, white people want to participate and have a conversation about racial healing and transformation. However, he said they are very clear with them that it is not just about healing, it’s also about repairing.

Part of the repairing process, particularly for white people— is that they need to be very clear about their complicity in racism, Rico added.

White people also need to be very clear that the only way they’re going to be able to heal, is if they give up something—whether it’s their privilege, whether it’s their resources or the false belief that they superior, he said. But Rico added what they are learning as they move forward is that this is a process very few white people want to take. However, “it’s such a necessary process,” he stated. “Because that’s the only way we can truly be in solidarity.”