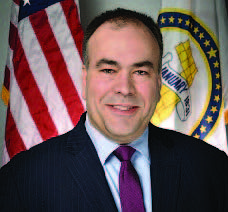 Cook County Assessor Fritz Kaegi is taking on property tax reform in Illinois. Kaegi said the way property has been assessed in previous administrations has led to inequities in the process and it’s put a burden on people who have less money.

When it comes to the assessment piece, the Cook County Assessor’s Office puts a market value on every piece of property in the county, including commercial and residential properties.

What the Cook County Assessor’s Office does not determine, is how much tax has to be collected and how is it spread across the residents living in the county.

“Our assessments are about the equity, about how we divide that up amongst us, within communities. Some of the greatest disparities are across communities and we cannot solve that, but I raised my voice to call that out,” he said.

Kaegi said the assessments are how the county divides up all of the money school districts and bodies of government have to collect. He said there’s a lot of work that needs to be done, adding there’s about $15 billion in property taxes that have to be collected by more than 1,000 different levels of government in Cook County, which he says, is mostly for schools. “It’s our assessments that are used to divide that obligation amongst the people who live there,” he continued.

Kaegi said when it comes to assessments, every property owner is interconnected with everyone in their community because they are dividing up the pie amongst themselves.

Kaegi said the way that property tax is supposed to be assessed is by figuring out the market value of the property. He said when this is not done, it creates a disparity.

“The minute we start to deviate from those market values, to confer a favor on someone, basically when we do that—everyone else is picking up the tab there,” he said.

Kaegi said some of the reasons for this were gaps in the data needed to accurately estimate the value of the properties. Those gaps include the amount of income a commercial building earns from rent and the attributes, including square footage and amenities of a high-end property.

When there are gaps in data associated with the amount of income a commercial building earns from rent, and gaps in data related to certain attributes such as square footage and amenities, this tends to favor the higher end properties that tend to be more under-assessed,” Kaegi said. “That causes [the] more modest homeowner, the average homeowner, the Black and brown homeowner-to have to pick up more of the tab,” he said.

Kaegi said there is a total commitment in the Cook County Assessor’s Office to use market value to assess all property, as well as a commitment to close all the data gaps.

He pointed to the Data Modernization Bill, SB 1379. Kaegi worked with then-Illinois Senator Toi Hutchinson on the legislation in 2019. In June 2020, it was re-referred to the Rules Committee. Illinois State Representative Will Davis, D-30th Dist., is the sponsor of the bill on the House side.

Kaegi added, “We have also really committed to getting the values right the first time. We measure ourselves by measuring how we are serving the average homeowner who does not appeal. That’s the measure of how well we’re doing—making sure we get it right the first time, so that we’re serving that average person who’s not working the appeal system best as possible,” he said.

Kaegi said reforms take four years to run its course because the Cook County Assessor’s Office is only allowed to reassess one-third of the county at a time and with regards to that portion of the county that has already been reassessed, Kaegi said he thinks, “we have righted the ship.”

“We’ve gotten accuracy to within industry standards in most of the townships,” he said. “And, the average homeowner’s really been helped by what we’re doing to the tune of hundreds or thousands of dollars.”

Kaegi said as it currently stands, the North Suburbs have already been reassessed. The South and Western suburbs will be reassessed this year and the city of Chicago in 2021.