InForm Press Announces Release of “Out of the Shadows: The Henson Festivals and Their Impact on Contemporary Puppet Theater” 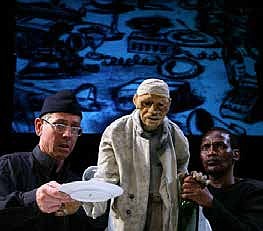 “Woyzeck on the Highveld,” by Handspring Puppet Company of South Africa. Directed and with animations by William Kentridge. Photo (c) Ruphin Coudyzer FPPSA