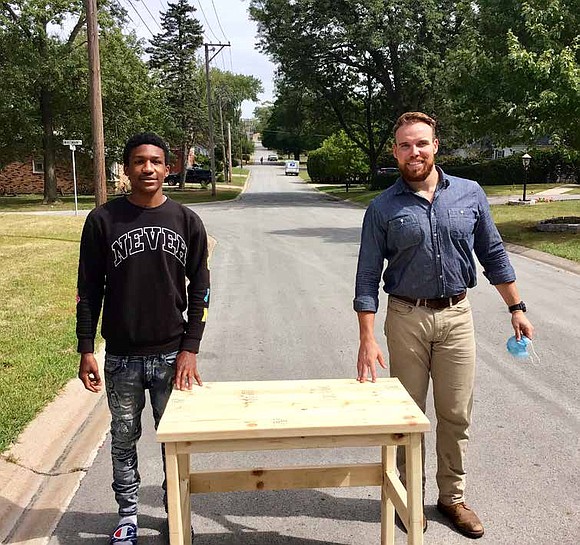 
BY TIA CAROL JONES
Students in Bremen High School District 228 have been in school for a month and taking classes remotely due to COVID-19. Marty Coyle, industrial technology teacher at Hillcrest High School, wanted to do something for the students, so he decided to put out a call for any
students who were in need of desks.
Coyle said when he got back to the school after the summer, he had a massive amount of lumber in the shop and couldn’t figure out what to do with it.
“I was just thinking, what good would it do just sitting there and we don’t know when the kids are going to come back,” he said.
Coyle said he thought about projects the students could do that would use the wood. He also thought about sending the wood home to his students.
“Then, I just started to realize the first or second day, a lot of kids, when they turn their cameras on, it was clear they were working from their bed or working from their kitchen table,” he said. Coyle decided to make the desks and found a simple way to make them.
He said he asked three or four students from his class if they needed desks, and they said they did. He said, after that, he decided he wanted to ask other students if they needed desks. To date, Coyle has made 38 desks, free of charge.
Coyle said while people have asked if they could purchase desks, he has not made the desks available for purchase.
“That wasn’t the point, it wasn’t supposed to be a self-serving type thing. It was just [that] I wanted to help kids in our community,” he said.
Coyle said he has received a large donation so he can purchase more lumber and build more desks. He said he wants to branch out and get the students involved in building the desks and donating them to people who need them.
Coyle said he would have about 125 students in the five classes he teaches. He added doing remote learning with his students has been tough, but he has been working on cardboard projects. He also
has been doing fun videos, called “Mr. Coyle’s Class.” In one of the videos, he gives step-by-step instructions on how students can make their own desks. He also has incorporated talking about skilled trades and career exploration with his students during remote learning classes.
“It’s challenged me to be a little more creative, but it’s been fun. The kids have responded well,” he said.
Coyle said the students have been happy to receive the desks. He said they have been so thoughtful and so thankful.
“I just wanted to do something to make our own community better and help the kids in the community and hopefully, that’s guided our kids to be more thoughtful and mindful of other people and spread joy to other people,” he said.
Antwan Bell is a senior at Hillcrest High School. He is one of Coyle’s students who received a desk.
“I don’t have anything inside my room I can do my work on, so when he told me about the desk, I was like, ‘sure thing, I’ll do it,’” he said. “I thought of all the things I could get done on there.”
Bell said when he saw the desk, he was excited because it goes with the things he already has in his room.
“I think that it’s good of him to do that, to provide desks to students. Mr. Coyle is one of my favorite teachers of all time,” he said. “He’s my favorite teacher because of the things he does. He’s like a
cool, fun teacher.”