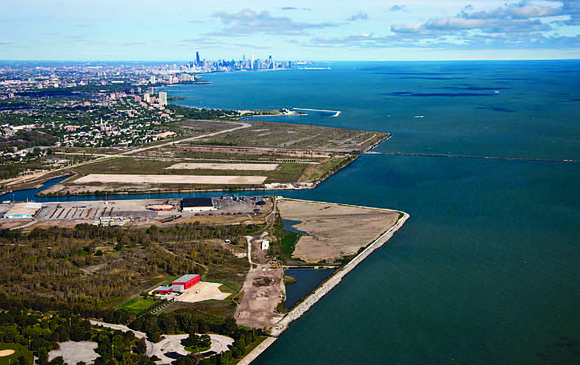 One of the major concerns about the CDF and its expansion is how rising lake levels will affect the community’s drinking water. Photo Credit: U.S. Army Corps of Engineers

The Chicago Area Confined Disposal Facility, located at Calumet Harbor on the Southeast side of Chicago is set to reach capacity by 2022. To deal with this, the United States Army Corps of Engineers has come up with a proposal to expand the current facility.

Community organizations and residents want to make sure the plan does not include building another dumping site in the neighborhood.

The 170,000 sq. m. Chicago Area Confined Disposal Facility has been at the site since 1984. It is where dredged sediment is placed. Dredging the sediment allows vessels to move through the Calumet River and Harbor, without the risk of running aground or light loading.

Padilla said the Corps of Engineers did lots of coordinating and held public meetings.

Residents made it clear they didn’t want a new facility built. So, they came up with the idea to do an expansion at the current facility.

“Because of the public opposition to building a new facility, we just decided to keep using the same facility and vertically expanding it,” Padilla said.

The Calumet Harbor and River/ Chicago Area Waterway System Feasibility Study was done for the Dredged Material Management Plan. The goal of the study was to explain how the Army Corps of Engineers investigated new sites and why they chose to expand the current facility instead. A draft of the study was released in May 2019.

Nieto Gomez said one of the major concerns about the CDF and its expansion is how rising lake levels will affect the community’s drinking water.

“The problem is now with the rising lake levels, because of climate change, we are concerned about the impact of erosion caused by waves hitting or beating up against the current dirt wall that separates the toxic dirt from our drinking water,” she said. “It’s really important to the community, for the city, and our region to protect the drinking water.”

Nieto Gomez said it is also important that the Southeast side of Chicago not continue to be a dumping ground. She said the community is already environmentally overburdened. And she said, the vertical expansion of the current CDF was the lesser of two evils.

“The community still wasn’t happy about toxic dirt being here,” she said. “That was a better proposal than having a second site.”

Nieto Gomez said the issues need to be addressed. Ultimately, what she wants is for the Army Corps of Engineers to work with the community to come up with a solution.

“We know the dirt needs to go somewhere, but we’re tired of it being in our community,” she said. “I think we need to have a serious conversation with the US Army Corps of Engineers about what the solutions are.”

Nieto Gomez said the community presented more than 8500 postcards against a second site on the Southeast side of Chicago. But they also don’t want it to go somewhere else.