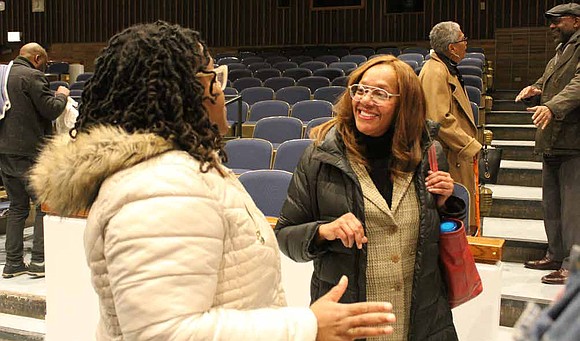 (from left) Ebonie Green, a South Shore resident, talked to Ald. Leslie Hairston (5th) after a March 10, 2020 community meeting about her concern about affordable housing once the Obama Presidential Center in Jackson Park is built. Photo credit: Wendell Hutson

A proposed Woodlawn HousingPreservation Ordinance crafted by Mayor Lori Lightfoot’s administration has two aldermen representing the South Side community at odds over it.

“Over the last several months, my administration has been very intentional about engaging with the residents of Woodlawn to listen carefully and learn about your hopes and fears for your community,” said Lightfoot, in a statement. “All of our combined hard work and community collaboration has resulted in the draft Woodlawn Housing Preservation Ordinance that addresses some of the most pressing needs of the community as articulated directly to me and other members of my administration.”

Newly elected Ald. Jeanette Taylor (20th), who was first elected in 2019, said she favors a previously proposed Community Benefits Agreement (CBA) pertaining to the pending development of the Obama Presidential Center (OPC) in Jackson Park, while veteran Ald. Leslie Hairston, who was first elected in 1999, said she supports the Woodlawn ordinance (WHPO) more so than the CBA. Taylor’s ward encompasses most of Woodlawn and Hairston’s ward represents a small percentage.

“Both proposals offer a lot of what the community said they wanted to ensure Woodlawn residents would not be priced out of their homes as a result of the Obama Center,” said Hairston. “This ordinance is still in ‘draft’ form so there’s time to make changes, which ultimately will happen before it is final.”

Hairston hosted a March 10 community meeting at Hyde Park Career Academy High School to discuss the WHPO and to get feedback from the residents. Absent from the meeting was Taylor, a longtime community organizer, who said she did not attend because she does not support the ordinance in its current form.

“As the alderman who represents the majority of Woodlawn, I do not agree with the ordinance and I do not see eye to eye on this with the mayor or Ald. Hairston, but that’s OK,” Taylor told the Citizen. “At the end of the day, I was elected just like they [Lightfoot and Hairston] were and I am entitled to my belief of putting people over profit.”

She added that the proposed WHPO does not protect enough people from being displaced once the OPC is built. She would like to see funding put into various programs that would assist with rehabilitation of existing affordable housing increased to $30 from $10 million, and also more affordable housing units mandated to be built on city-owned lots.

“If this happens, it would be a start and would be something I could support. But as the Woodlawn ordinance stands now, I cannot support it because it does not do enough to protect residents from being displaced or to have [the] opportunity to purchase properties,” said Taylor.

Displacement is something the freshman alderman knows first hand. She was displaced in 2012 from Bronzeville due to the Harold Washington Cultural Center, 4701 S. King Drive, being built.

“I was living in a one-bedroom apartment with my five kids and paying $500 per month, but once property values and taxes went up in the area as a result of the Harold Washington Center, so did my rent to $1,000,” recalled Taylor, who said she now lives in a five-bedroom apartment in Woodlawn. “I can afford to pay $1,000 a month now, but back then, I could not and one of the hardest things to tell your kids is that you are moving them out of a neighborhood where they grew up.”