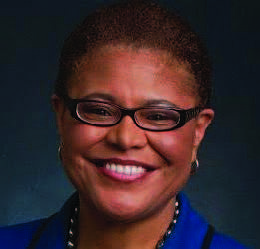 Congresswoman Bass, the chair of the Congressional Black Caucus (CBC), called the pandemic a “double-punch” to African Americans

Congressional Black Caucus Chair Karen Bass (D-Calif.) joined the Black Press of America for a live interview to discuss the plight of African Americans during the coronavirus pandemic.

Congresswoman Bass, the chair of the Congressional Black Caucus (CBC), called the pandemic a “double-punch” to African Americans.

She also called out President Donald Trump for what she stated was his lack of leadership as the virus has claimed more than 100,000 lives, including as many as 40,000 black people and the deaths of Ahmaud Arbery and George Floyd.

Arbery, an African American Georgia resident, was shot and killed while jogging by a former law enforcement officer and his son.

Floyd died after a police officer inexplicably and aggressively pressed his knee into the handcuffed Minneapolis resident’s neck.

Bass also warned that Republicans led by Lindsay Graham (R-SC) are trying to get certain federal judges off the bench so that the GOP can shape the judicial branch for generations to come.

She said the Trump administration’s failure to act and to lead during the pandemic has damaged America’s reputation on the world stage and the president’s obsession with former President Barack Obama is in large part because Obama was superior in every way.

“The man [Trump] has a very serious inferiority complex, I think he knows that President Barack Obama is superior to him intellectually, morally, physically, and I think that’s very troubling to him,” Bass stated.

“How dare this black man be better than him. Obama’s popularity around the world is off the charts. Trump has never been able to arrive at the same standard, quality, effectiveness, honesty, moral character of Barack Obama.”

During the 30-minute exclusive interview, Bass said the Black Press and local newspapers were essential, and she and the CBC continue to press for a financial set-aside for publishers.

“It’s not only discussions, and it was on our priority list. It still is,” Bass said of efforts to assist struggling African American newspaper publishers financially.

“The best way to come at it is that the CBC has been calling for specific intervention in areas where COVID-19 specifically is killing black people,” Bass stated, adding that it’s a four-pronged effort.

“One is testing, one is treatment, one is tracing, and one is a public education campaign,” she said.

“The way we have packaged this; we think the public education campaign should provide direct resources to black newspapers, and that’s part of our plan. The Census needs to invest in our (black-owned) newspapers heavily. There’s no reason the federal government doesn’t do business with our newspapers. Of the billions of dollars they spend in advertising, some of it should be spent with our newspapers,” Bass stated.