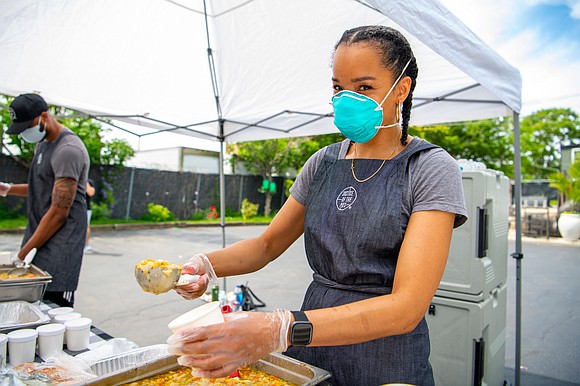 In the midst of marches and uprisings because of the alleged murder of George Floyd, tensions among the Black and Brown community came to a head. Social media posts cautioned Black people not to go to predominantly Latino communities throughout the city of Chicago.

Chef Maya-Camille Broussard, founder of Justice of the Pies and Justice for All Recipes, has her kitchen in East Garfield Park. She gets supplies in Pilsen, so the reports were scary for her.

Broussard said despite the conflict, there were also Brown people coming out to give their support to Black people and there was a peaceful rally with Black and Brown people. “We are the minority, so we are all going through some aspect of the same thing,” she said.

Broussard said looting at grocery stores decreased food sources in neighborhoods, and in some cases, those neighborhoods were already down to one grocery store. She’s been partnering with Frontline Foods, an organization that has been providing thousands of meals to frontline workers during COVID-19, using volunteers and food purveyors.

“So, through the partnership with Frontline Foods Chicago, it just seemed natural to pair up with a Brown chef, as a Black chef, to provide meals for a community that could really use it, and that was Pilsen,” she said.

Broussard paired up with Mario Santiago, executive chef and owner of May St. Café in Pilsen. Santiago said he and Broussard shared a common goal of feeding frontline workers and he said it was important to show the unity of Black and Brown people in the food industry.

“No one should go hungry, it doesn’t matter if you’re black, brown, purple or green,” said Santiago. He added the numbers in the African American and Hispanic communities are “so strong,” and for whoever is listening out there, it’s really important “to show the strength of” those numbers. “There’s no reason why in the year 2020, we should have such racism,” he added. “We felt it necessary to show what we’ve already been doing and what our beliefs are,” he said.

Santiago said it was nice to see the diversity of the volunteers who came out to distribute the food. He said they were genuinely there to help out and they had more volunteers than they needed at the event.

In all, there were 1,000 meals distributed at the Pilsen location and 6,000 meals in locations throughout the city. Santiago said the response from people was overwhelmingly excellent and people were very appreciative of the efforts. “We’re all in the same situation, regardless of race,” Santiago said. “COVID-19, it doesn’t discriminate. It’s taking us all down.”

Broussard said people were very humbled by the fact that they distributed the food. She said it was really cool that people honked their horns to say thank you. “With all that we had been going through, with all the tension that we had in the past week, it was just really good to bring some joy to the neighborhood in that way,” she said.

Broussard said food is the one thing that always ties people together.