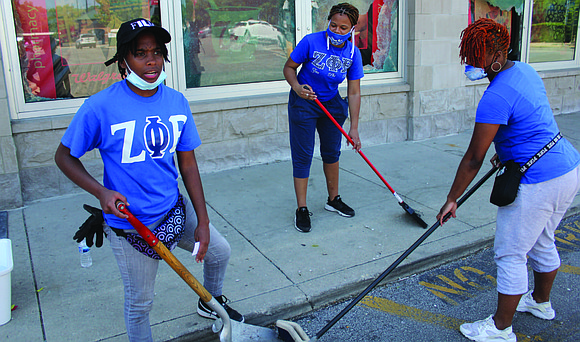 Community leaders and residents have banned together to help clean up their communities after a looting spree devastated many neighborhoods especially on the South and West Sides.

Chatham Business Association President Melinda Kelly said it brought tears to her eyes when she inspected the damage to small businesses following five days of looting and vandalism between May 29 and June 2.

“I have never had tears in my eyes before when it was work related until Sunday (May 31) when I was taken back after seeing the destruction caused by looters. This comes about right as businesses were just coming off the COVID-19 pandemic,” said Kelly. “When something like this happens, it’s hard to see the light when you have been in a dark tunnel for the past two months waiting for the virus situation to pass over. At this point, we are operating on blind faith, but I am confident that as a community, we will get through this tragedy, rebuild and push on.”

And while Kelly said she expects local businesses to be up and running again before year-end, residents said they are optimistic about Chatham, a black, middle-class community, returning to normal.

“Let’s just say the ‘glory days’ are behind us and I doubt if things will ever be the same again,” said Pamela Allen, 81, a Chatham resident since 1987. “I could tell you some stories about Chatham and how things used to be when I first moved here and how so much has since changed. And now, after all this breaking into stores, I don’t see Chatham ever being the same again.”

Desmond Bonner, 74, said he moved to Chatham with his wife in 1971, and said black-owned businesses were the norm back then.

“I remember eating breakfast at Izola’s on 79th Street and afterwards walking to Chatham Food Market to get a newspaper to read on my front porch,” he recalled. “That was in the 80s though, when the neighborhood was becoming more diverse with middle-class blacks. By this time, we had black folks like Roland Burris (a former U.S. Senator, Illinois Attorney General and Illinois Comptroller) living here.”

One business totally destroyed by looters was Walmart at 8300 S. Stewart Ave., according to Ald. Howard Brookins (21st) whose ward includes West Chatham.

“A lot of businesses may not recover from this devastation and many people who worked at these retail stores are now out of a job and that is very unfortunate,” said Brookins. “Many small businesses are faced with closing their doors for good unless we as a community and as a city step up to help them.”

He added that some small businesses may not have had adequate insurance coverage to rebuild and that’s why it is important for everyone to help.

“Hopefully, Walmart and Walgreens will come back to Chatham, but it’s the small businesses I worry about the most because they do not have the same safety net as larger retailers,” added Brookins.

“We’re working to assess the situation with each location and planning to reopen stores as soon as possible, recognizing the important role we play in so many impacted communities,” the statement read. “(And) we are assessing each location to understand our ability to do that.”

Phil Caruso, a Walgreens spokesman, did not disclose how many stores have been damaged or closed, although the Illinois Pharmacists Association estimates 60 Chicago-area pharmacies (not all Walgreens stores) were damaged from looting.

Throughout the South Side, volunteers, community residents and stakeholders have stopped by affected stores to help clean up.

Savannah Wallace, a 31-year-old Woodlawn resident, Jovun Shaw, a 24-year-old Washington Park resident and Rhonda Nunn, a 26-year-old resident in south suburban Dolton, are all members of Zeta Phi Beta Sorority Inc. and said they helped clean up businesses along the Stony Island Avenue Corridor between 67th and 75th streets.

“Even though I no longer live in Chicago, I grew up in this area and I wanted to come help a community I still consider home,” said Nunn. “The three of us helped clean up Jewel, the Dollar store and now Walgreens.”

For Wallace to see Walgreens at 1533 E. 67th St. severely damaged it hit home for her.

“This is where I came to get my prescriptions filled and now to see it this way is hurtful,” said Wallace. “I don’t know who would do such a terrible thing to a community. I just hope all the businesses are able to reopen because the community needs them.”

Volunteering came easy for the trio, explained Shaw, who said service is one of the principles their sorority stands for.

“Helping people and the community is one of the many things Zeta Phi Beta Sorority Inc. does as an organization,” she said. “Our goal is to do whatever we can to help these businesses and the community get back on their feet where they belong.”