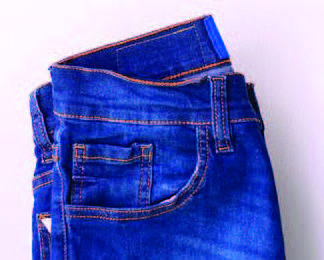 Almost 40% of people experiencing homelessness in the United States are under 18, according to covenanthouse.org. One item they commonly request in homeless shelters is a pair of jeans. Why? Jeans are comfortable in any season and can be worn multiple times between washes. Plus, for a teenager without many belongings, wearing a pair of jeans can provide a sense of security.

That’s why DoSomething.org, the largest organization for young people and social change, and Aéropostale, the specialty retailer of casual fashion apparel and accessories, have teamed up for the ninth time on their marquee “Teens for Jeans” campaign, which, since 2008, has activated young people to donate over 5 million pairs of jeans to local shelters serving young people, with support from celebrities like Demi Lovato, Chloe Grace Moretz, Kristen Bell, and more.

“’Teens for Jeans’ is the campaign young people request from us the most, and we’re so proud and excited to bring it back in a massive way with Aéropostale this year,” says Carrie Bloxson, chief marketing officer of DoSomething.org. “In our conversations with leaders at homeless shelters, we’ve learned that jeans are one of the most requested items from young people experiencing homelessness.

Students around the country are extremely excited to activate their schools and communities to run denim drives for local young people in need, and that energy is going to drive enormous and lasting impact. ‘Teens for Jeans’ is the country’s largest youth-led denim drive.”

Young people can visit DoSomething.org/Teens or text TEENS to 38383 to sign up for the campaign. They are guided on how to hold jean drives at their schools and in their communities, and when to drop off their jean donations at their local Aéropostale store.

Those who complete the campaign by February 29 will be automatically entered to win a $2,500 scholarship from DoSomething. In addition, Aéropostale will be rewarding a $10,000 grant to the school that collects the most jeans, and a $5,000 grant to the runner-up school.

To help amplify the campaign and encourage young people to get involved and support this important cause, actor Jenna Ortega, best known for her roles in Netflix’s You, Jane the Virgin, and Stuck in the Middle, visited SafeHouse of the Desert, a shelter supporting young people near her hometown of Indio, California. In a new ‘Teens for Jeans’ PSA video, Ortega talked to the shelter’s director and two young people to learn about about their experiences and how to get involved.

“Youth homelessness isn’t something you can always see. We might not realize it, but for so many of us, our friends and classmates may leave school and go to a shelter, not a home,” said Ortega.

“Talking to people who are my age, near my hometown, who have overcome homelessness was powerful and inspiring. I’m immensely proud to be a part of ‘Teens for Jeans’ and help students make a difference for young people in their communities.”