MOTHER AND DAUGHTER CO-WRITE BOOK WITH AIM TO INSPIRE 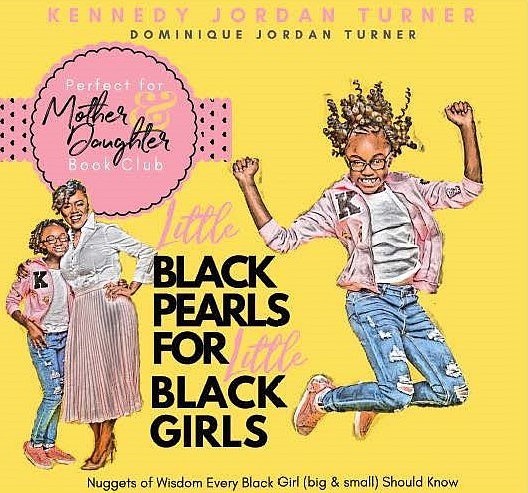 Mother and daughter co-write book with aim to inspire

Dominique Jordan Turner thought it was important to instill confidence in her daughter early on. Growing up, she struggled with confidence and wanted something different for Kennedy.

“It took me a while to grow into my confidence and when I had a daughter, I said, ‘if I can get her on that road sooner, she’ll be a whole lot better off, she can master that confidence’ ,” she said.

As a result, Kennedy Jordan Turner has co-authored a book with her mom, “Little Black Pearls for Little Black Girls,” which she also illustrated.

The 60-page book has nuggets of wisdom about building confidence.

“I wrote the book because, like my mom said, she wanted me to master confidence and I wanted to share that with other young black girls because I also want them to be confident,” Kennedy said.

Some of the nuggets include: You are beautiful no matter what shade you come in; and Your hair has a superpower love and celebrate it.

Dominique is a busy CEO running an organization and Kennedy is a busy 11-year old with lots of activities, so the project of writing the book brought them together.

“I think work-life balance is like finding a purple unicorn. It’s impossible to find. And so, I try to do work-life integration. So, we just find ourselves busy and not spending as much time together, so this was a project that really brought us together in some intentional ways that were meaningful,” Dominique said.

Dominique added that they took inventory of what was important and recognized that their time together was critical. Dominique said she realized Kennedy was an amazing artist, who taught herself graphic design.

“It went from sketch books and drawing on pieces of paper to actually illustrating. And so, once that happened, it changed everything,” Dominique said. “Once I realized that, I was like, this is a skill, let’s get this out into the world.”

Kennedy said illustrating the book was really fun for her.

“Some of them [the illustrations] took a long time and some of them took under an hour. I just tried to make them look as good as I could,” she said.

Kennedy said creating art and illustrating is something she would like to continue to do. It is one of her passions.

“I recently had an art show in February. And, my art was featured there, and it was super fun and I got to see my art like hanging on a wall in a gallery,” she said. “Seeing things like that make me happy because I see my art and illustration[s] getting somewhere and that makes me feel really good.”

Dominique said the book is a great opportunity for daughters and moms to bond.

Each pearl has an activity that moms and daughters can do together. The goal is to deepen the partnership and spend some quality time together.

When it comes to her favorite pearl, Kennedy said it’s the last one: Never quit ever. Persevering is important to her, she added and she always tries to do her best.

The book is available for purchase on Amazon. For more information about Kennedy Jordan Turner, visit https://www.kennedyjordanturner.com.