New Investment Will Jump-Start Development Of South Side Performance Theatre 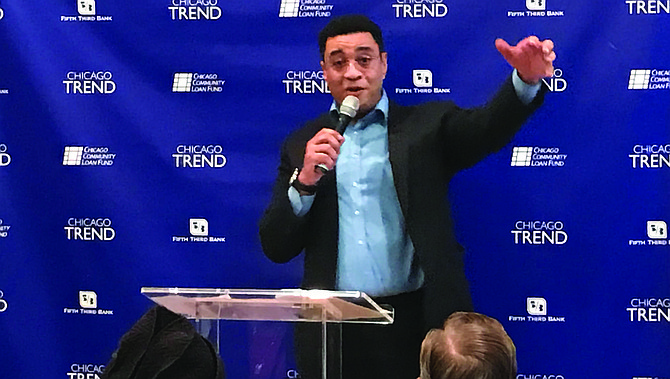 New Investment Will Jump-Start Development Of South Side Performance Theatre

Chicago TREND is a social enterprise that finances and accelerates strategic commercial developments in emerging neighborhoods.

The first project that will receive funding from the new investment is the Lillian Marcie Center for the Performing Arts which is currently being planned for development in an existing building on 4343 S. Cottage Grove Ave. in Bronzeville.

Members of the Lillian Marcie Center development team include Keith and Aaron Giles, Mike Wordlaw, and Harry Lennix who will be responsible for running the theatre’s first year of operations and curating programming.

The building that will become the Lillian Marcie Center for the Performing Arts was originally built in 1925 and the development team plans to transform the structure into a modern theatre complex that will feature a 350-seat multi-level performance stage, a 100-seat boutique theatre, rehearsal space, dressing rooms, offices, indoor and outdoor gathering spaces, a refreshment area, and a rooftop deck.

Lennix, who is a Chicago-born television, film, and stage performer, remembers having opportunities to experience performance art on the south side while he was growing up and his goal for the Lillian Marcie Center for the Performing Arts is to rebuild those opportunities in Bronzeville.

“It struck me that when I was a young man growing up in Chicago, I had a number of robust artistic places I could go to apply my trade,” said Lennix. “It seemed to me that perhaps there was a way to build something that could be managed and could be a home and a repository for a number of organizations that have been doing great work for a number of decades.”

Once complete, the Lillian Marcie Center for the Performing Arts will act as a resource and a new home for many performing arts organizations that have already been operating in the community, according to Lennix.

“I want to be very clear that we will be managers of the building but that’s just a black box. The box is going to be filled up with materials from a number of organizations,” said Lennix.

While the investment from Fifth Third Bank and support from the Chicago Community Loan Fund and Chicago TREND are significant checkpoints in the development of the Lillian Marcie Center for the Performing Arts, there is still more work to be done and more money that needs to be raised.

“We expect this project to take two years to develop and we are just at step one. The loan to get that building is not going to be enough to develop that building,” said Lennix. “We’ll need the help of the City and Alderman Sophia King has already expressed her desire to help us.”