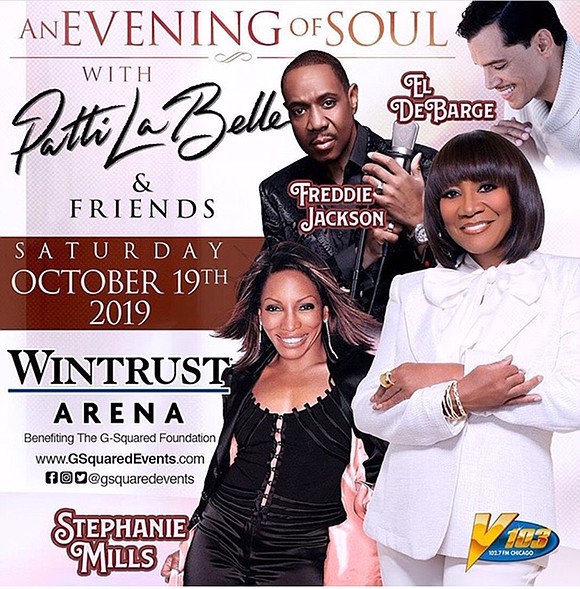 G-Squared Events is excited to announce their upcoming event entitled “An Evening of Soul” with Patti LaBelle, Stephanie Mills, Freddie Jackson, and El DeBarge. This night of soulful music will take place on Saturday, October 19, 2019, at Wintrust Arena in Chicago, Illinois. Doors are scheduled to open at 6:30PM and the event will take place at 7:30PM.

Grammy® Award-winning singer, Patti LaBelle, is an unparalleled force in the entertainment industry. LaBelle’s name has become synonymous with grace, style, and class. Her effortless ability to belt out classic rhythm and blues renditions, pop standards, and spiritual sonnets has created the unique platform of versatility for which she is celebrated. The Philadelphia born entertainer created her first hit in 1962 as the lead singer of The Bluebells, before going on to receive worldwide acclaim with the trailblazing, genre-bending all-female trio, LaBelle. After going solo in 1970, LaBelle has created timeless songs, fortifying herself as an icon in the music industry.

In addition to her prestigious music career, LaBelle has written five best-selling books, created a successful line of food products, and has starred in her own highly rated cooking specials on the Cooking Channel and Food Network. Her impressive and diverse achievements as an entertainer, businesswoman, and author has garnered her numerous honors including Grammy® Awards, American Music Awards, NAACP Image Awards, New York Times bestseller, and the 2016 Marian Anderson Award.

Stephanie Mills is a Grammy award–winning singer, songwriter and Broadway stage actress. Mills rose to stardom as "Dorothy" in the original Broadway run of the musical The Wiz from 1975 to 1977. The song "Home" from the show later became a number 1 R&B hit for Mills and her signature song. During the 1980s, Mills scored five number one R&B hits, including "Home", "I Have Learned to Respect the Power of Love", "I Feel Good All Over", "You're Puttin' A Rush on Me" and "Something in the Way (You Make Me Feel)". Mills' won a Grammy Award for Best Female R&B Vocal Performance for her song "Never Knew Love Like This Before" in 1981.

One of the greatest R&B balladeers of all time, Freddie Jackson, continues delivering what he knows best. Those knockout love songs with an unwavering vocal confidence brought us “You Are My Lady,” Nice & Slow”, “One Night” and many others that made his name special through the mid-eighties and into the nineties. Undoubtedly, Jackson still knows how to stay on top of his game, making several absolute dents on today’s R&B charts by reaching the top 100 on several occasions. Whether it’s time to dance, time for romance, and even in contemplative moments, Freddie has earned his place as an R&B legend who continues to create pure timeless music.

The hit-filled evening will also include multiple Grammy® Award nominee, El DeBarge, who started his career as the lead singer of the family group DeBarge and later as a solo artist. El DeBarge helped to define the soulful R&B sound of the 1980s and beyond. Long known for his high tenor register and strong falsetto, his is the voice behind hits like “Time Will Reveal,” “All This Love,” “Love Always,” and his signature tune, “Rhythm of the Night.”

Based in Houston, Texas, G-Squared Events produces high-quality live entertainment experiences with some of the world’s biggest performers including Charlie Wilson, B2K, Tyrese, Steve Harvey, Keith Sweat, and Brian McKnight. For over 20 years, G-Squared Events has leveraged data-driven insights with our event production expertise to deliver world-class events while earning enduring loyalty from our patrons, artists, and venue partners. G-Squared Events was recently recognized as one of the top independent promoters, at No. 30 on Pollstar’s Worldwide Top 100 Promoters chart. To learn more, visit www.GSquaredEvents.com.