SOUTH SUBURBS COULD TAKE A PAGE FROM ROBBINS TO COMBAT CRIME 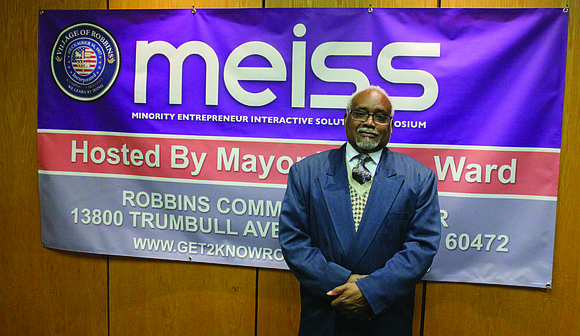 Robbins Mayor Tyrone Ward says crime rates in Robbins are down for the first time since 2015, and now he wants to share his crime fighting strategy with other suburban mayors and police chiefs. Photo credit: By Wendell Hutson

South Suburbs Could Take a Page From Robbins to Combat Crime

As a result, Ward said crime rates in Robbins are down for the first time since 2015, and now he wants to share his crime fighting strategy with other suburban mayors and police chiefs.

“There are several things that need to be implemented in order for crime to go down in the south suburbs and we have begun doing some of those things like improving our community policing,” Ward told the Citizen. “The police department has to be connected to the community because there’s no way around that. It is vital to build a good relationship with the community in order to stop crime and solve crimes like homicides.”

He added that more resources would help suburban villages combat crime too especially when it comes to addressing unemployment, which he said leads to poverty.

Ward said more resources are, “key to reducing crime because without the necessary support, whether that’s hiring more police officers or simply providing youth programs to keep kids off the streets, it’s hard to tackle this problem head on,” he added. “I’d like to think we provide hope (to people) as opposed to dope and by doing so it gives people encouragement to stay focused and positive.”

Ward did not attend the meeting but said he is in touch with other elected officials about it. But Cook County Commissioner Donna Miller (6th Dist.) did attend.

“One thing we learned at this meeting with the state’s attorney is that retail theft and juvenile crimes are up in the south suburbs,” said Miller, a Lynnwood resident. “The crimes being committed by juveniles are small (misdemeanors) but as it turns out these same youth go on to eventually commit felonies as they get older.”

Miller said she plans to host several more meetings over the next six months with elected officials within her district to come up with solutions on combating crime.

And while Miller said a crime summit is being discussed, a date has not yet been determined.