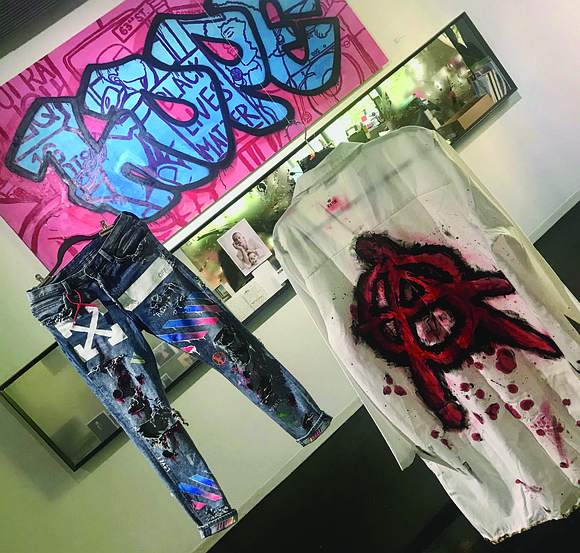 The Hyde Park Art Center recently hosted a grand opening ceremony for their newest exhibit called It Be Like That Sometimes which features dozens of original artworks that were created by local teenagers who participated in the Hyde Park Art Center’s teen programs. The art on display includes paintings, drawings, photography, prints, clothing design, and multimedia projects.

Under the guidance of professional artists, the teens were able to develop their creative voice and use their art to answer socially relevant questions and make statements about the challenges they face.

“This year, we had seven incredible teen programs that surveyed communities and neighborhoods all over the city but primarily on the south side,” said Alex Herrera, teen programs manager at the Hyde Park Art Center. “We want to continue to expand these programs and help teens to continually see themselves in the work that we do and be a driving force and a voice in all of the programs.”

The title of the exhibit, It Be Like That Sometimes, is a slang term that simplifies the constant ups and downs of human life. The term is a way of acknowledging that some things are just unknown and out of our immediate control.

“This phrase is commonly used to describe the uncertainty of life and how you can find yourself in a multitude of situations and sometimes they can be good and sometimes they can be bad. Together, the artworks of this show are celebrating the joys in life but also the hard times as well,” said Julia Koreman, co-curator of It Be Like That Sometimes.

Through their art, the teens addressed really complex topics such as gentrification, justice, and healing. Some artworks used a broad lens to examine issues that they wanted to address and other works appeared to be more intimate and show the students’ personal struggles.

One teen artist, Lorenz, chose to share his experiences through clothing design. Lorenz painted, tore, bleached, and burned a pair of jeans and a lab coat that are on display at the exhibit. At first glance, the clothing items look like high fashion streetwear but Lorenz described that everything he took away or added to the items had meaning.

“I had a pair of jeans in my drawer that was a little bit too small and I didn’t know what to do with them. I decided to paint on them and see what happened,” said Lorenz. “I chose a lab coat because I wanted to make something that you wouldn’t typically see and I’ve never seen someone wearing a lab coat on the street. I painted a red A on the back to represent self-government. I’m starting to use meaning in the clothes I make and incorporate simple things that can speak loudly.”

It Be Like That Sometimes will be on display at the Hyde Park Art Center from now until August 11. To learn more visit www.hydeparkart.org.