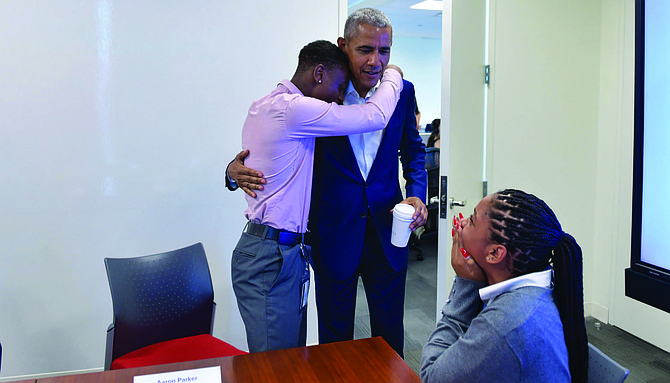 President Barack Obama recently surprised a group of students in Chicago who were in a meeting at the Obama Foundation headquarters as part of the Youth Job Corps program. The students were shocked to see President Obama walk into their meeting and join in on their conversation about activism in Chicago.

The group of students that got to spend the afternoon with President Obama are part of the Youth Job Corps which is a workforce readiness program that was created through a partnership between Urban Alliance, a national youth development nonprofit organization, and the Obama Foundation.

The Youth Job Corps program provides workforce training and internships to high school sophomores, juniors, and seniors from the south side to help them build their pathway to success and economic stability as adults, according to information provided by the Obama Foundation.

“Part of the goal of this program is to expose you to what’s possible,” President Obama said to the Obama Youth Jobs Corps interns. “Everybody here has already shown extraordinary talent and initiative. All of you are focused in a way that I can’t say I necessarily was when I was your age. So you guys are already ahead of the game. Part of our goal is also to make sure that you recognize that even as you succeed, that the communities from which you come are going to need you to be active and involved and engaged and focused. Because all of us, as citizens and generally, have an obligation to make sure that we’re tending to the city we live in, the country we live in.”

President Obama met several young Chicagoans during his visit, including Adarah Hale. Hale is a recent graduate of Kenwood Academy High School and lives in South Shore. During her time in the Youth Job Corp Program, Hale has been interning for Northern Trust in their Corporate Risk Management department and at the end of the summer, she will be heading to North Carolina A&T State University to study criminal justice and biology, according to information provided by the Obama Foundation.

“A lot of minority students, and people who look like the people that are in this room, are always the people that are always two steps behind in life and with this opportunity from Urban Alliance and working with the Obama Foundation Youth Job Corps we all feel like we really got a chance to have an even playing field now and I really wanted to thank you for that,” Hale said to President Obama during his recent visit.

Overall, 13 students were able to meet President Obama and share with him their experience in the Youth Job Corps program.