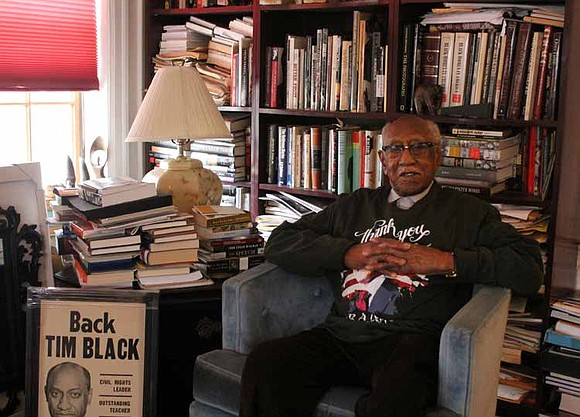 At age 100, Timuel Black, a historian and civil rights activist, who is also a retired City Colleges of Chicago teacher, organized protest marches for Dr. Martin L. King Jr. when he would visit Chicago during the 1960s. Photo by Wendell Hutson

These days Timuel Black, a historian and civil rights activist, can walk without a cane, travels around town alone and still remembers his childhood days growing up on Chicago’s South Side.

That’s not bad for a man who turned 100-years-old on Dec. 7. The retired City Colleges of Chicago teacher recently sat down with the Citizen to reflect on where the black community has been, where it is headed and how he helped change black history in Chicago.

“Housing segregation still exists in Chicago. More unity is needed in the black community,” said Black. “Nowadays, there’s a unique class-separation, but back when I was growing up there was no class-separation among blacks. We all looked alike and we all lived in the same neighborhoods.”

He said during his generation, black kids lived at home with both parents. “There were mostly two-parent households back then but today that is less than 35 percent,” contends Black. “The community has disconnected itself from helping families and now we have a bunch of single mothers raising children with no help from the community.”

One thing Black said that bothers him is to see so many young people not planning for the future.

“The reason you see so many young people shooting each other is because they do not believe there is a future for them and they just don’t care about their actions,” added Black. “That’s why you don’t see more young people voting and getting involved with their community.”

He added that if you ask a young person what do they look for when shopping they would probably say they look for the best they can find at the cheapest price.

“And I would tell them that is exactly how slave traders shopped when they went to Africa looking to buy slaves,” said Black. “Sometimes it’s not about getting the cheapest price for something because in life you have to be willing to pay more to get more and that means making sacrifices.”

According to Black, technology has taken away many jobs blacks once held, so blue collar jobs are in less demand.

“We [blacks] were brought here as cheap labor but today, economically, we are no longer needed,” said Black. “According to their [whites] standards, we cost more than we bring in. So why should they need us? To find the answer

to this question I suggest everyone should read the book Who Needs A Negro by Sidney M. Willhelm.”

Black said he tried improving life for blacks by getting politically involved and helping blacks like the late Harold Washington get elected as Chicago’s first black mayor in 1983. Black also campaigned for President Barack Obama in 2007 and organized protest marches for Dr. Martin L. King Jr. during the 1960s when he visited Chicago.

In a letter to Black last December celebrating his 100th birthday Obama said, “Tim’s lifetime of service is a testament to just how powerful it is to wield love stronger than hate. Because he devoted his gifts of community organizing, young people across Chicago can dream a little bigger and they can aim a little higher, and for that, we owe Tim a profound debt of gratitude.”

However, as much as Black admires Obama, he said he is not fond of President Donald Trump.

“He is dangerous. Trump has threatened our allies and non-allies like North Korea and that makes it dangerous for everyone in America,” said Black. “His behavior reminds me of Hitler, a man who separated people based on class and race.”

The former social worker and teacher for Chicago Public Schools graduated from DuSable High School in Bronzeville. Among

his classmates were singer Nat King Cole and John H. Johnson, founder of Ebony and Jet magazines. But prior to attending DuSable he attended Wendell Phillips High School, also in Bronzeville.

“A lot of people may not know that DuSable High School was originally built as an extension to Wendell Phillips due to overcrowding,” explained Black. “They [whites] decided that rather than have these Negroes move into the ‘white schools’ they would instead build another building.”

CPS officials could not confirm if DuSable was originally built as an extension to Wendell Phillips or as a new school entirely. Phillips was built in 1904 and was the first public high school in Chicago whose students were predominately black even though Phillips himself was a white abolitionist and attorney.

The War World II Army veteran attended Roosevelt University in 1949, and after graduating in 1952, Black attended the University of Chicago and earned a master’s degree in social science. By 1954, he was student teaching at DuSable High School, but officially began his teaching career at Roosevelt High School in Gary, Indiana. He also taught history and anthropology at Olive-Harvey College.

Prior to marrying his wife Zenobia 37 years ago, Black was married twice before and had two children by his first wife, a daughter and a son. Black said while his 70-year-old daughter is still alive, his son passed away years ago. Zenobia said the one thing people might not know about her husband is that he loves to eat Chitlins (also known as chitterlings.)

“The first meal he ever cooked for me when we dated was chitlins. I came over to his place and he asked me what would I like to eat and I said chitlins,” recalled Zenobia, 69. “Without missing a beat he goes to the freezer and pulls out a container of chitlins. Then he went into the refrigerator and got spaghetti, coleslaw and corn muffins. That was our first dinner together and the rest is history.”

Everyday Black said he looks forward to waking up.

“I like the sunrise because it brings a new day.”