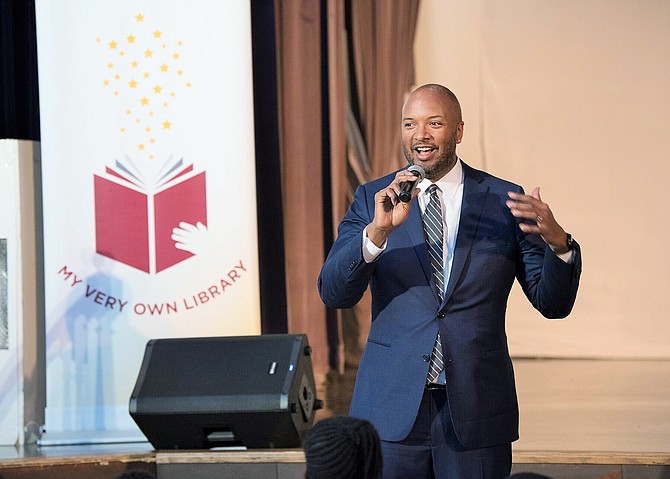 Among the goals of a literacy program managed by the University of Chicago, is to encourage more students to read books more, especially black and brown students.

“A definite goal we have is to get books in the hands of students attending schools in urban neighborhoods, who might not have access to programs that support reading,” said Duane Davis, executive director of K-12 Education Initiatives for the Office of the President at the University of Chicago. “Our program is currently in 18 schools and we are quickly growing with a goal of expanding to other schools beyond the Hyde Park area.”

Currently, the 18 participating schools are located in the Hyde Park and Bronzeville communities. However, some parents said if the university wants to make the program more diversified, it should consider offering the program in schools on the Far South Side.

Rosie Parker, 72, said her two grandchildren love to read, adding reading is their passion. They “read a different book every week,” but she said she’d rather see them in a reading program like the one in Hyde Park.

While Parker’s two grandchildren attend Countee Cullen Elementary School in Pullman, she said, “It’s a shame that this program is not citywide and excuse me for saying so, but it appears that this program is only available for kids attending schools in more affluent neighborhoods like Hyde Park.”

According to Davis, a majority of the students at the participating schools are black.

“The statistics I have for those schools show 92 percent of the students are African American,” he said.

After a successful Sept. 23 launch event followed by a Dec. 3 book signing at the UChicago Charter-North Kenwood Oakland campus, 1119 E. 46th St., Davis said more than 9,500 Chicago pre-k through eighth grade students would each receive ten free books this school year through a series of book fairs and literary events. At each book fair, students get to meet an author, who discusses their book, and then signs a copy for every student.

Davis said giving books to young children not only sparks a love of reading in students, but studies show it can lead to better academic, social and emotional outcomes. “Reading should be fundamental for every student but unfortunately, that is not always the case,” he added.

And due to budget woes by Chicago Public Schools, some elementary schools do not have a librarian on staff. Davis said a school is not required to have a librarian to participate in the program.

“I know CPS is committed to this program and understands how important it is to read. CPS Chief Executive Janice Jackson attended our launch event earlier this year to show her support for our literacy program,” added Davis.

The literacy program was founded in 2011 and has programs in six U.S. cities and the Dominican Republic. In 2015, the program was introduced to Chicago and in 2019, the program began operating under the umbrella of the University of Chicago.

By year-end, program officials estimate it would have given away 234,000 books and donated over $1.2 million to support literacy efforts for Chicago students.