Honoring a lifetime of Achievement, Music and Memories at Centenary Celebration Weekend 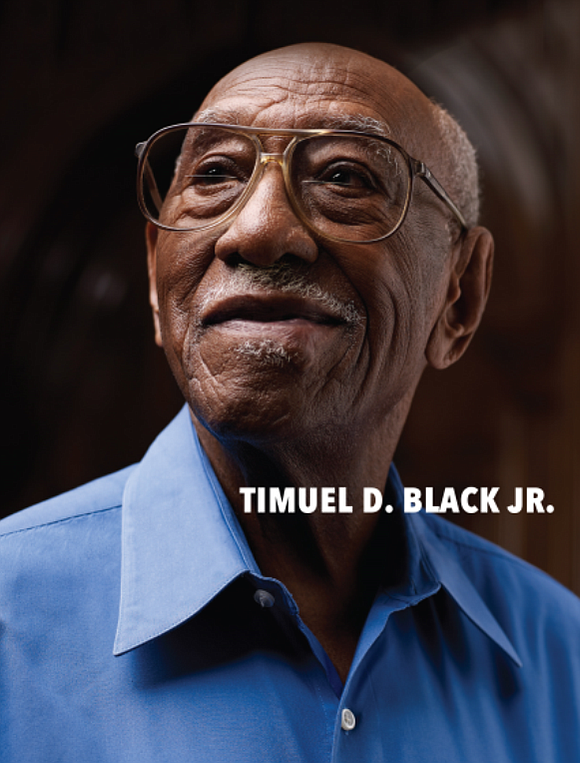 In his Bronzeville neighborhood, he is known as Baba, Griot. Teller of tales, fighter of the good fight, protector of our history. He is a cultural icon, a larger than life figure whose legacy encompasses more than 80 decades. His life’s journey has been one of serving country, building family, securing civil rights and supporting community. On December 8-9, 2018, Chicago will celebrate the 100th Birthday of Timuel D. Black, Jr. with events in Chicago at Logan Center and at the South Shore Cultural Center.

TDB 100 Years: Music & Memories - Gala Birthday Party is set for Sunday, Dec. 9th, 3:00 p.m. – 7:00 p.m. at South Shore Cultural Center, 7059 S. South Shore Drive. The French Consul General will bestow on Black the French Legion of Honour Medal. Robert “Baabe” Irving III, a native Chicagoan and outstanding jazz musician and composer, has been commissioned to create a composition for the occasion. “Sound Pictures of a Century-The living Legacy of Timuel D. Black” will be premiered by an 18 piece orchestra featuring Dee Alexander and Maggie Brown at the gala. Black, whose actual birthday is December 7th, is a jazz aficionado and has been a member of the Board of the Jazz Institute of Chicago for over 20 years. NBC-5 Special Contributor Art Norman will serve as the emcee.

“We are excited to pay homage to Tim Black, our brother, our Chicago treasure,” said Father Michael Pfleger, Senior Pastor, St. Sabina. “It is fitting that we honor him for a lifetime of unparalleled service to the community. He is an educator, soldier, political activist, lecturer, civil rights leader, author and social historian. He is all those things and more to us.”

The weekend celebrations are expected to attract more than 500 well-wishers, including community representatives, business leaders, elected officials, educators and jazz enthusiasts. "Many attending will be those who worked with him in the trenches of struggle, who marched, protested and campaigned; who shared heated debates and board meetings with him,” stated Congressman Danny K. Davis. "In his life, in his work, in his writings Tim has been the tireless standard bearer for equality, social and economic justice and empowerment. He continues to inspire us each day."

Timuel Black was born in Birmingham, Alabama on December 7, 1918. After serving in the U.S. Army during World War II, Black enrolled at Roosevelt University where he received his

bachelor’s degree and later earned a master’s degree from the University of Chicago. Black has run for public office several times and spent his life furthering the cause of social justice. He is a pioneer in the independent black political movement and assisted, advised and supported political leaders including Dr. Martin Luther King, Harold Washington, and Barack Obama.

In 2008 he received an honorary doctoral degree from his alma mater, Roosevelt University, and In 2012 became the first African American recipient of the University of Chicago’s William Benton

Medal for Distinguished Public Service. In 2013, the City of Chicago honored Black with the inaugural Chicago Champion of Freedom Award, in recognition of his work in the civil rights movement both locally and nationally.

He has authored two of a three-book series chronicling the “great migration” and the history of Chicago from the 1920s to the present. His memoir, Sacred Ground, is set to publish in 2019 by