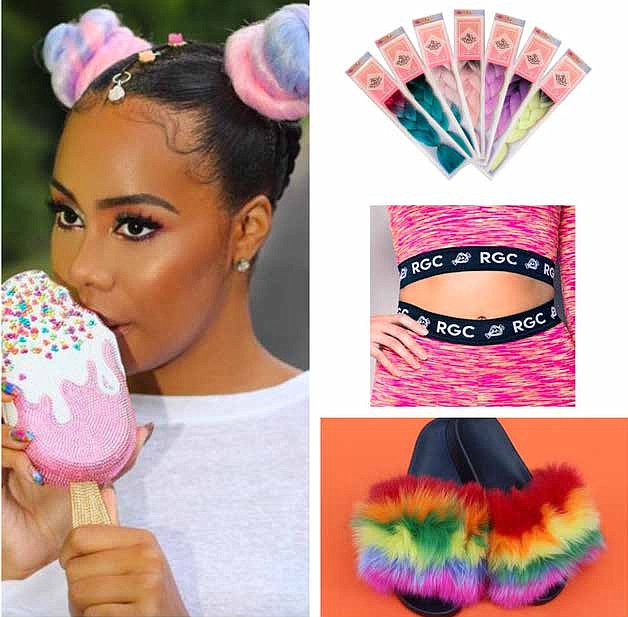 Fusing the psychedelic exuberance of the electronic dance music (EDM) lifestyle with the street savvy of hip hop culture, Mieka's Rich Girl Candy exploded on the

fashion scene with an abundance of colorful creativity. She captured the hearts of women who wanted to feel as electric as the music that sound tracked their lives.

Juggling entrepreneurship with motherhood, fashion and the limelight run in the family for Mieka Joi. A Chicago native, Mieka Joi is the former longtime girlfriend of NBA player Derrick Rose. Their young son, six-year-old Derrick Rose Jr., has already grabbed his own headlines as a celebrity child model and accompanies his mom on many of her business ventures.

Though Rich Girl Candy is celebrating a successful five years, Mieka Joi is no newcomer to fashion. In fact, she will tell you that she was born into it! "My mom has always been into fashion, so I was her dress-up doll as a child. Even after delivering me, my mom and dad brought me home in a Gucci GG signature fabric bassinet and baby blanket!

As a child, department stores were always my preference over playgrounds! My mother's good friend was well renowned fashion designer Barbara Bates. I remember going to Barbara's shop when I was six years old. We would design purses and clothes for my dolls, and then she would help me sew and make them."

Mieka Joi initially launched her career as a stylist. She attended Clark University for mass media arts, majoring in public relations, marketing and advertising and began

an internship at Roc-a-Wear during her sophomore year, assisting the district buyer for the brand in Atlanta. Her first business, "Socialite Styling," offered fashion, makeup, and hair consulting to everyone as well as celebrities that included tennis champion Serena Williams, reality TV star, Malaysia Pargo and athletes Derrick Rose and Carlos Boozer.

Mieka Joi has special plans closing out the year in celebration of her five-year milestone. December will see her hosting a "pop up fashion museum" for rap star Trina in Miami as well as the release of her unicorn influenced holiday line. Mieka is also planning to open her first stand-alone boutique in Chicago, to support her