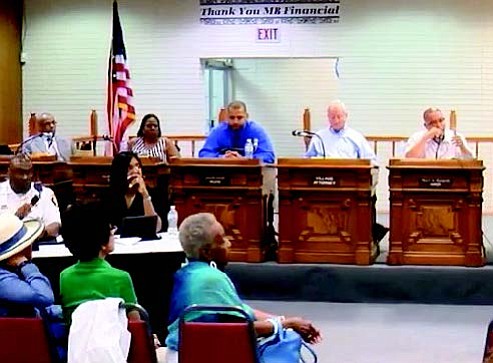 The Village of Dolton recently held a Committee of The Whole meeting where they discussed several current projects, programs, and concerns within the community.

The Village of Dolton recently held a Committee of The Whole meeting where they discussed several current projects, programs, and concerns within the community. One woman, who identified herself as Beth, raised the questions of why three retired police officers have not been replaced in the Village.

The Village of Dolton Resident, Beth, continued with her public comment and became very upset as she called for immediate action from the board saying, “if you can’t get us more police, resign right now, you are not doing your job.”

A Village of Dolton Trustee, Robert Pierson Jr., immediately responded to the resident's outcry for more police officers in the community.

The Mayor of Dolton, Riley Rogers, interrupted Pierson to say that his statement was not true.

“We have to redo the budget. We tabled [hiring police officers] so we could see, after the budget, if we are going to have enough money to hire one or two police officers. Right now, we have to look at the whole budget simply because we cannot do what prior administrations did,” said Pierson.

Trustee Pierson later made it clear that what he was alluding to when he said, “ we cannot do what prior administration did,” was that in past years, the Village of Dolton had been transferring money from the water fund to the general fund to balance their budget.

Mayor Rogers stepped in to ask a few questions of his own. He called on the Village of Dolton Police Chief, Robert Collins Jr., to verify how many officers the department is currently down. Collins confirmed that there were three police officers that retired last year.

Trustee Pierson shouted out to say that the Village of Dolton was “$2 million over in that budget.”

The Mayor made one final statement before moving on to the next subject.

For a list of upcoming board meetings in the Village of Dolton, visit vodolton.org.